Thousands of Illegal Immigrant Children Could Be Freed Into U.S.

Up to 2,000 illegal immigrants could be released back into the United States as a result of a federal ruling last week that requires the Department of Homeland Security to free "without unnecessary delay" illegal immigrant children and their mothers from federal detention centers.

A U.S. District Court judge in California issued the ruling, despite protests from the government and warnings that the legal order is misguided.

The judge in the case ignored the government’s arguments against release, calling them "repackaged and reheated." The ruling finds DHS in violation of a law mandating that immigrant children not be kept in unlicensed facilities, according to Fox News. DHS has until Oct. 23 to comply with the release order.

A DHS spokesman told the Washington Free Beacon that it categorically disagrees with the ruling, but that its hands are tied in the matter.

"While we continue to disagree with the court’s ultimate conclusion, we note that the court has clarified its original order to permit the government to process families apprehended at the border at family residential facilities consistent with congressionally provided authority," the official said.

"As family residential centers continue to operate consistent with this order, DHS will continue to screen family members' claims as expeditiously as possible, while ensuring that their due process rights are protected," the agency added. "We continue to review the decision and consider available options with the Department of Justice."

A majority of those minors have already been released since their initial apprehension, according to U.S. Customs and Border Patrol, which says that only 1,820 illegal immigrants are still being detained.

While DHS argued that the mandated release of these illegal immigrants could encourage another surge of illegal immigration, the judge, Dolly M. Gee, dismissed this argument as "fear mongering" and "speculative at best," according to Fox.

Just 1,269 illegal immigrants remain in detention at a South Texas facility. Another 474 remain in Texas’ Karnes facility, and 77 are being held at the Berks center in Pennsylvania, according to DHS.

A flood of illegal immigrant children attempted to cross the U.S. border in June of last year, causing DHS to go on high alert as a result of what it dubbed a "mass exodus."

More than 250 illegal children were being apprehended on a daily basis at the time. A large number went on to petition the U.S. government for asylum.

Most of these illegals were never detained by DHS or Immigration and Customs Enforcement (ICE).

"The reality is that ICE was never detaining very many of these cases anyway," said Jessica Vaughan, director of policy studies at the Center for Immigration Studies.

Of the tens of thousands apprehended between July 2014 and May 2015, just 3,384 cases were brought against family members who had been detained with children, according to data released by immigration courts.

Another 35,700 cases were brought against individuals who had already been released.

"I think it’s fair to say that only about 10 percent have ever been detained, and many of them were detained only a short time before release," Vaughan explained. 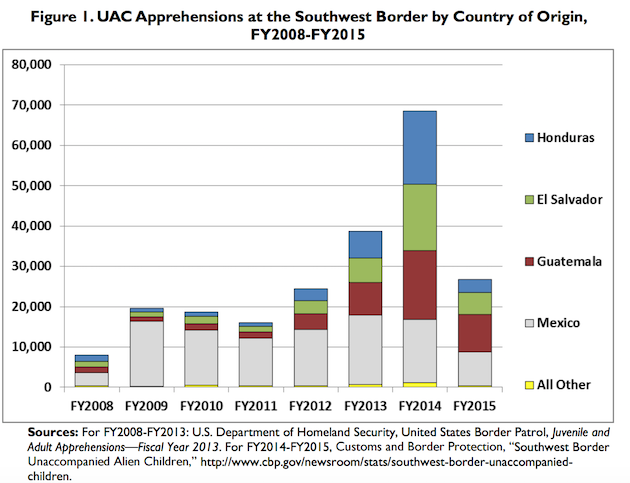 "These family heads have a very poor rate of compliance with the generous due process that they have been given," she added. "Eight-four percent of those who were released did not show up for their court hearing, and 29 percent of those classified as having been in detention skipped out on their hearing."

U.S. lawmakers at the time petitioned the Obama administration to send the National Guard to the southwest border to address the problem.

"The president needs to immediately send the National Guard to the southwest border to deal with this crisis," Rep. Michael McCaul (R., Texas), chair of the House Homeland Security Committee, said in a hearing last June. "Patrol stations are not set up to handle this massive and growing number of detainees. Let alone children."

"This is a crisis. It’s a crisis that’s been in the making for years," McCaul said. "One that we should have seen coming. But few concrete actions have been taken. The Department of Homeland Security and the United States government as a whole has been slow to act, turning a blind eye to the warning signs."

Meanwhile, local law enforcement agencies disclosed to the Free Beacon late last week that DHS had been hiding the release of illegal immigrants with violent criminal records back into U.S. towns.