MITCH DOESN’T NEGOTIATE WITH TERRORISTS … "McConnell says he is ready to proceed with Trump impeachment trial with no agreement on witnesses," via WAPO: Senate Majority Leader Mitch McConnell (R., Ky.) said Tuesday that Republicans have enough votes to proceed with President Trump’s impeachment trial with no agreement with Democrats on witnesses …

Sen. Chris Murphy (D., Conn.) said Tuesday that [House Speaker Nancy] Pelosi should go ahead and send the articles of impeachment to the Senate since it appears that McConnell is holding the GOP in line against a deal with Democrats on witnesses for a Senate trial.

WHAT DIFFERENCE, AT THIS POINT, DOES IT MAKE? … "Joe Biden Confuses Iraq With Iran—Twice," by WFB’s Graham Piro: "Iran's parliament voted to eject all Americans and coalition forces from the country," Biden said at a rally in New York. He made the mistake again when he said Trump threatened to get the United States into war with Iraq.

"I said not long ago that as the walls close in on this president, I worried that he was going to get us in war with Iraq," Biden said at private fundraiser in New York City.

BOB GATES WAS RIGHT ABOUT JOE … "Biden in 2010 Said Iran’s Influence in Iraq Was ‘Greatly Exaggerated’," by WFB’s Adam Kredo and Brent Scher: Months before Iran successfully installed its hand-picked government coalition in Iraq, Vice President Joe Biden told a group of U.S. military veterans that Iran's influence in the country was "minimal" and had been "greatly exaggerated." …

EARLY 2020 WINNER: RUPERT MURDOCH … "Super Bowl ad wars: It's Bloomberg vs. Trump and they're spending millions," via NBC NEWS: The campaigns of former New York City mayor Michael Bloomberg and President Donald Trump each plan to spend $10 million for advertisements during the telecast of next month's Super Bowl …

The Super Bowl, which is set for Feb. 2, will air on Fox and could be watched by more than 100 million people in the United States.

NOT DEAD BROKE … "Chelsea Clinton made $9M since 2011 from corporate board position: report," via NY POST: Chelsea Clinton raked in around $9 million since 2011 for her work on the board of an internet investment firm controlled by a pal of her mom’s, a report said Monday.

"A Facebook Executive Said The Platform Is Responsible For Trump’s Election," read BuzzFeed‘s headline on the story, with the subhead cutting off the written remarks at "So was Facebook responsible for Donald Trump getting elected? I think the answer is yes."

MUSLIM BAN AT WORK? … "Iran’s Zarif Accuses U.S. of Violating U.N. Deal by Denying Him a Visa," via REUTERS: Iranian Foreign Minister Mohammad Javad Zarif accused the United States on Tuesday of violating its agreement with the United Nations by denying him a visa to speak at a Security Council meeting amid escalating tensions between Washington and Tehran …

The Security Council meeting would have given Zarif a global spotlight to publicly criticize the United States for killing Iran's most prominent military commander, Qassem Soleimani, in Baghdad on Friday.

OUR MORAL BETTERS IN EUROPE … "A Victim’s Account Fuels a Reckoning Over Abuse of Children in France," via NYT: The French writer Gabriel Matzneff never hid the fact that he engaged in sex with girls and boys in their early teens or even younger. He wrote countless books detailing his insatiable pursuits and appeared on television boasting about them. "Under 16 Years Old," was the title of an early book that left no ambiguity …

But the publication, last Thursday, of an account by one of his victims, Vanessa Springora, has suddenly fueled an intense debate in France over its historically lax attitude toward sex with minors. It has also shone a particularly harsh light on a period during which some of France’s leading literary figures and newspapers—names as big as Foucault, Sartre, Libération, and Le Monde—aggressively promoted the practice as a form of human liberation, or at least defended it.

NOW HE CAN REALLY SMIRK … "CNN Settles Lawsuit Brought by Covington Catholic Student Nicholas Sandmann," via NRO: "The amount of the settlement was not made public during a hearing at the federal courthouse in Covington on Tuesday, according to a local Fox affiliate.

CNN brought down the full force of its corporate power, influence, and wealth on Nicholas by falsely attacking, vilifying, and bullying him despite the fact that he was a minor child," reads the suit, which was filed in March.

Sandmann and his family still have lawsuits pending against NBC Universal and the Washington Post over their coverage of the incident.

"The IRGC [Islamic Revolutionary Guard Corps] was saying that Ayatollah Khamenei, the supreme leader of this country, was in the control center coordinating these attacks," he told anchor Chris Matthews during a broadcast of Hardball on MSNBC. "This bit I'm not sure about but Iran state media says 30 U.S. soldiers have been killed in this attack. 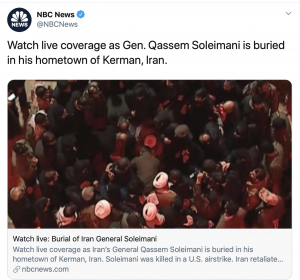 CHIEF WARREN NABS CRUCIAL DUKAKIS ENDORSEMENT … "Can Elizabeth Warren’s Selfie-Taking, Plan-For-That Campaign Win Her the Nomination?," via VOGUE: The approach, so far, has had a broad appeal. John Legend supports Warren. So does Michael Dukakis. Saturday Night Live has given her, as played by Kate McKinnon, more of a tacit endorsement than it has any early-cycle candidate in recent memory … When Julián Castro dropped out of the race, he promptly endorsed her for president.

WELL, JUNIOR, THE GOOD GUYS KILLED A BAD GUY … "How to Talk to Your Kids About the Situation With Iran," via TIME: On Jan. 3, the U.S. military carried out a drone attack in Iraq. The attack killed Qasem Soleimani, a top military leader from Iran … The situation is dominating the news, and children who hear about it are likely to have lots of questions.

We realize this is a difficult topic to explain to kids. TIME for Kids is here to help. 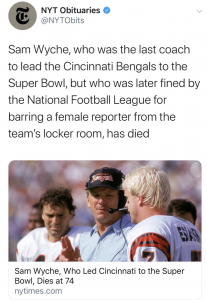 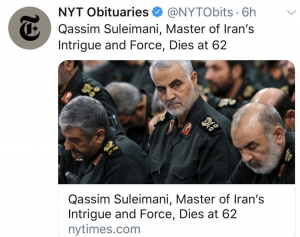 WELCOME BACK … "Valerie Plame Returns to Twitter After Blaming Social Media Site for Spread of Anti-Semitic Screeds," by WFB’s Cameron Cawthorne: Plame was roundly criticized in 2017 after she shared with her Twitter followers several anti-Semitic articles from the fringe site the Unz Review, including one accusing "American Jews" of "driving America's wars" and another titled "Why I Still Dislike Israel."