Former Vice President Al Gore used a familiar line Sunday when he told ABC's George Stephanopoulos that recent weather reports are like the Book of Revelation from the Bible.

Stephanopoulos asked Gore whether President Trump's decision to withdraw from the Paris climate accord was significant, considering that former President George W. Bush did the same thing with the Kyoto treaty on climate change in 2001.

"We lost a lot of time when the U.S. did not join the rest of the world community then, and while it is true that we have this sustainability revolution under way, and it's very exciting," Gore said. "It has the magnitude of the industrial revolution, but the speed of the digital revolution."

Gore went on to compare weather reports on television to the Book of Revelation, which is a book in the Bible that talks about the apocalypse.

"We're still not changing fast enough. It's not just the scientific community warning us now. It's Mother Nature. Every night on the TV news is like a nature hike through the Book of Revelation," Gore said. "70 percent of Florida is in drought right now. Missouri just declared an emergency with another one of these historic climate-related downpours."

Gore said that the United States has to move faster on fighting global warming and then praised the rest of the world and American businesses for acknowledging climate change.

"We need presidential leadership. Since he's not going to lead, the American people are stepping up," Gore said.

This is not the first time that Gore has likened weather reports to the Book of Revelation, as he has made the comparison several times before.

"These storms—it’s like a nature hike through the Book of Revelation on the news every day now," Gore told NBC's Matt Lauer in 2013. "People are connecting the dots."

"Every night on the news is like a nature hike through the Book of Revelation," Gore said last month before an advance screening of his his latest documentary, An Inconvenient Sequel: Truth to Power. "And I'll wait for the newscasters to connect the dots."

SCIENCE: Global Warming May Be Our Only Hope of Containing Wuhan Virus 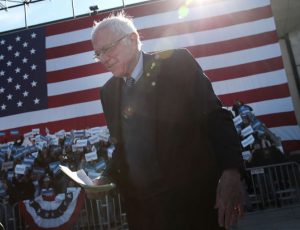