He announced on Twitter shortly after 12 a.m. on Thursday that she was arrested on misdemeanor chargers after she permitted a customer to touch her in a "non sexual manner" while on stage.

Just rcvd word that my client @StormyDaniels was arrested in Columbus Ohio whole performing the same act she has performed across the nation at nearly a hundred strip clubs. This was a setup & politically motivated. It reeks of desperation. We will fight all bogus charges. #Basta

Evidently, Avenatti was displeased with the arrest, referring to it as desperate and politically motivated. "They are devoting law enforcement resources to sting operations for this? There has to be higher priorities!!!" he continued in another tweet.

She was arrested for allegedly allowing a customer to touch her while on stage in a non sexual manner! Are you kidding me? They are devoting law enforcement resources to sting operations for this? There has to be higher priorities!!! #SetUp #Basta

Ohio law dictates that "an employee who regularly appears nude or seminude is prohibited from touching patrons on the premises of a sexually oriented business — unless it's a family member."

Daniels was brought to a correction facility in Jackson Pike and was charged with misdemeanor sex offenses, CNBC reported. She posted bail and was released Thursday morning. Avenatti promised to "vehemently contest all charges."

Avenatti reported there were several undercover vice officers at the club and they arrested Daniels immediately after the customer touched her.

A probable cause affidavit, obtained by a CBS affiliate, claims detectives saw Daniels "remove her top and force patrons' faces into her chest." The complaint alleges she also fondled the breasts of female patrons. When detectives approached the stage after witnessing these actions, Daniels grabbed the faces of two of them and shoved them between her breasts, according to the complaint.

Daniels,  whose real name is Stephanie Clifford, claims she had an affair with President Donald Trump in 2006 while the president was married to Melania Trump. Michael Cohen, Trump’s former personal attorney, set up a shell company to pay Daniels $130,000 in return for her signing a non-disclosure agreement in October 2016.

Daniels is suing Trump to be released from the agreement. The president has denied an affair occurred.

Avenatti later posted an official statement from Daniels in which she announced she would "unfortunately be unable to go forward" with her scheduled Thursday performance in Ohio.

Official Statement From @StormyDaniels: As a result of what happened last night, I will unfortunately be unable to go forward with tonight's scheduled performance. I deeply apologize to my fans in Columbus.

UPDATE 9:00 A.M.: This story was updated with Daniels' statement. 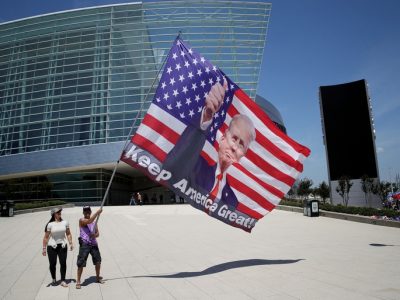