Midway along the path of life’s journey, I found myself lost in a dark wood.

That is how Dante Alighieri began his epic poem La Comedia, the so-called Divine Comedy, which tracks his journey of the soul through hell, purgatory, and finally heaven, in a quest to better his own soul. Written in beautiful rhyming Italian and using complex imagery and intricate references, the poem is difficult enough to translate, let alone reinterpret through dance.

If any company is up to the challenge, it is Synetic Theater, which is beginning its 2016-2017 season, The Art of Silence, with a new dance production of Inferno. Audacious to say the least, the performance packs Dante’s (Vato Tsikurishvili) journey through the nine circles of hell into a one-act, 100-minute rush of action and music.

Even more impressive: The show uses only 15 dancers. 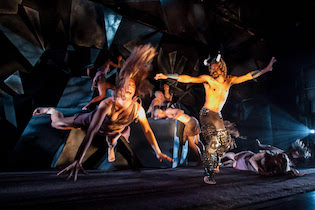 Creator Paata Tsikurishvili and director Irina Tsikurishvili have created a show that draws upon the physicality and strength of the performers to develop the anguish of the setting. Instead of elaborate set pieces, Synetic’s Inferno frequently uses the dancers themselves, as when the gates of hell first open to reveal a devil with horns formed from another dancer’s pointed feet and legs. In this production, the dancers present not only tormented souls and prancing devils, but also the setting—the flames and waves of the hellish landscape itself.

Given the complexity of the original poem, it is stunning how much detail the performance maintains, from the appearance of Beatrice (Tori Bertocci) to the struggling writer Dante, through the sorting and judgment of the souls, down to a particular trumpeting devil from the eighth circle. At the same time, the dance version makes several significant changes to the poem.

Most striking is the near absence of Virgil, Dante’s guide through this world of torment. Danced by Alex Mills, Virgil is not altogether absent in the production, but only appears sparingly, leaving Dante to confront his temptations and terrors alone. This is a profound departure from the poem, where Virgil, author of the The Aeneid, represents the classical learning which infatuated Dante Alighieri. At the same time, he becomes Dante’s friend, his confidant, and his guard in the depths of hell. Without his presence, Dante is not touring hell so much as passing through it.

In place of Virgil, Synetic has Beatrice appear to inspire Dante at several key moments. While her blessed face does inspire the poet as he treks through the inferno and purgatory, hers is a holy rather than carnal love. The rapturous embrace the two share in later scenes of this production feels slightly tawdry, lowering her from saint to lover. 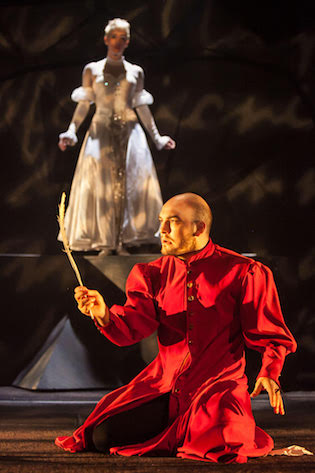 Recognizing the limitations of the different mediums—dance and poetry—may be the primary difficulty for a lover of the poem. The intricacy of Dante’s poetry and the whisper of his words cannot be conveyed through silent dance. Still, something of the lurid horror of his tormented setting resonates more through imagery than through words.

The performance is a lurid spectacle of punishment and suffering, but lacks the exquisite balance of the poem. At times, it almost glories in the suffering of the souls, who are contained in levels of the inferno that are constructed to punish the dead according to their failings.

In the end, the difference between the production and the poem may stem from different interpretations of what the poem is about. While modern audiences are most familiar with the Inferno’s scenes of punishment, Dante Alighieri wrote it as the first third of a larger whole, a beginning that consistently looks forward to the purification and sanctification of the souls in purgatory and heaven. Even standing in the flames of hell, Dante’s pilgrim character glimpses hints of heaven’s light. Divorcing the inferno from this view of man’s potential salvation robs it of its most profound message, showing the soul in torment, without showing how it can be purified to exist in a state of bliss.

By the end of the production, Dante is no longer lost. And yet, it seems that for him, paradise remains a far-off gleam.