Today's Oscar nominations brought some surprises—six nominations for BlacKkKlansman! Three for The Ballad of Buster Scruggs, which had mostly been shut out of the awards season buzz! Little love for If Beale Street Could Talk!—and confirmed some things we all knew (A Star Is Born racked up a ton of nominations! Roma is going to be Netflix's first real chance at Oscar glory!). But one thing it really hammered home? I destroyed JVL and Vic in the Sub-Beacon Oscar Draft.

Sadly, the podcast episode during which this seminal event took place is lost to the mists of time. But here's the real-time scorecard keeping track of our draft picks: 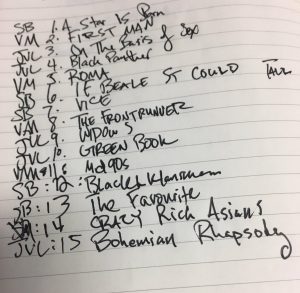 For those of you who don't want to squint at my chicken scratch, this is the lineup:

A Star Is Born

If Beale Street Could Talk

On the Basis of Sex

As promised by me, many times, I earned more points in the nomination phase of the game than both of my cohosts combined. It was truly a dominant performance by Sonny Bunch, one of the best critics and prognosticators in the game:

But I'm a gracious blogger! I don't want to just gloat here. I want to give my friends the chance for fair comment.

"I told you Black Panther would be huge, and I was right," JVL said when asked for comment about the shellacking I put on him. "I told you Green Book was the money pick, and I was right. I told you people would go crazy for Bohemian Rhapsody, and I was right. My only mistake was underestimating the lingering power of the Hollywood patriarchy in denying On the Basis of Sex. I had thought that time was up, but I was mistaken. Maybe next year. #Resist"

Vic—who managed to draft three (THREE!) movies that got zero nominations—nevertheless had one great pick: Roma.

"I knew Roma was going to sweep the noms, which is why I didn't care that my other picks were crap," Vic said, with what I imagine to be a sheepish look on his face. "Also, you really can't tell what's going to do well based solely on watching trailers."

(Fact check: I picked Vice—eight nominations, including best picture—based solely on the trailer.)

Anyway, consider this your latest reminder that #SonnyIsAlwaysRight. Make sure to tune into the show February 24 to see just how badly I crush my cohosts.

A Matter of Treason