You can never accuse Washington Nationals first baseman Adam LaRoche of absentee parenting. While most pro athletes spend months holed up in hotels away from family, LaRoche allows his 11-year-old son Drake to ride shotgun with during the season as the Nats crisscross the country. Evidently, Adam also arms Drake with an actual shotgun. 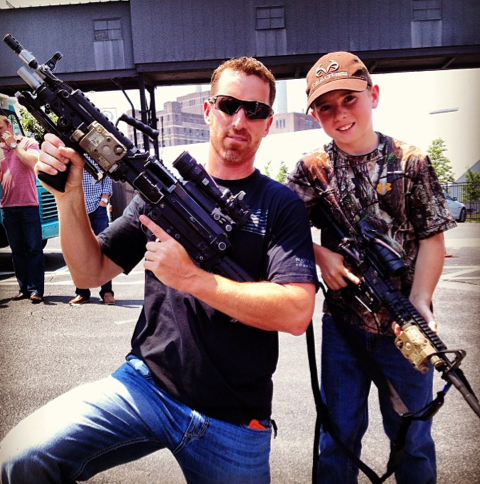 I know it's not a shotgun, but roll with me here.

The elder LaRoche's arming of his 11-year-old is no surprise, as the first baseman co-produces a hunting program on the Outdoor Channel. Laroche's dream hunt involves bow-hunting grizzly bears with Drake.

LaRoche allows his son to travel with him to Florida for spring training, putting Drake’s school year on hold. Having lived in Kansas, their home state, in February, Drake is quite possibly the luckiest kid ever because middle school in the Sunflower State is el worst.

"We’re not big on school," LaRoche said. "I told my wife, ‘He’s going to learn a lot more useful information in the clubhouse than he will in the classroom, as far as life lessons.’ "

Adam has the same philosophy that my father has: "don’t let school get in the way of your education."

Drake’s school has signed off on his father’s unique child rearing, as long as Drake passes Kansas’s standardized tests. If major league ballplayers can connect better with their children out on a baseball diamond better, No Child Left Behind ain’t so bad after all.

Adam LaRoche has every right to eschew traditional school to raise his son in a baseball dugout armed with a bow. Take that, Germany.