Daniel Wattenberg is a writer living in Washington, D.C. 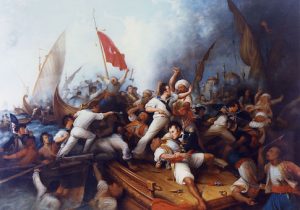 With the unanimous assent of his cabinet, the recently inaugurated Thomas Jefferson decided in May, 1801 to send a naval squadron to Tripoli, albeit with limited, defensive objectives: to provide safe convoy for American shipping, and to enhance the professionalization of the Navy with what amounted to cost-effective, on-the-job training in the Mediterranean. Command of the small, first Mediterranean squadron—the frigates President, Philadelphia, and Essex, and the schooner Enterprise—fell to Commodore Richard Dale, one of the original six frigate captains. Shortly after reaching Gibraltar on July 1, 1801, Dale learned that the bashaw had months previously cut down the flagpole standing before the U.S. consulate in Tripoli, signaling the commencement of war.