Senate candidate Mark Kelly (D., Ariz.) sat on the advisory board of and held a significant financial interest in a Colorado company that partnered with a Chinese state-financed tech giant to bring supersonic aerospace technology to China in 2018, according to his financial disclosure reports.

Kelly, a former NASA astronaut, served on the advisory board for Boom Technology, a high-speed aircraft company in Colorado from 2015 to 2019 and owned private stock in the company worth between $115,000 and $300,000 as of last year.

In 2018, Boom Technology partnered with the Shanghai-based travel company Trip.com Group Limited, formerly known as Ctrip, to help "bring supersonic flight to China," according to a joint announcement from the companies.

Ctrip has also been a key player in the Chinese government’s ongoing "Belt and Road Initiative," a massive multi-country infrastructure project that the U.S. government has described as a global security threat.

Kelly, who is challenging Republican incumbent Martha McSally for an Arizona Senate seat, has faced scrutiny for other China-linked business interests and investments. World View Enterprises, a company he cofounded and holds investments in, received funding from Chinese tech company Tencent, the Washington Free Beacon reported last October. Tencent has been accused of espionage and of censoring antigovernment sentiment on its WeChat app.

A Kelly spokesman said the candidate was an adviser to Boom but never sat on the company’s board, calling this a "misleading" attack by supporters of Kelly’s Republican rival Martha McSally.

"Senator McSally’s allies continue to make inaccurate and misleading political attacks. Mark was not a ‘board member.’ He was an adviser with a limited role advising primarily on technical matters given his expertise as a former combat pilot, test pilot, and astronaut. He had no role in investments," said Kelly’s communication director Jacob Peters in an email to the Free Beacon on Friday.

Peters declined to comment on Kelly’s duties as an advisory board member. Typically advisory boards exist alongside a company’s formal corporate board and provide strategic advice to leadership.

A spokeswoman for Ctrip declined to comment on the company's financial relationship with the Chinese government or provide details on its partnership with Boom.
"The deal was made more than two years ago," said Ctrip spokeswoman Wendy Min in an email. "For further inquiries, please contact Boom."

In a financial disclosure report filed with the Senate last year, Kelly wrote that he was an "Advisory Board Member" at Boom from Oct. 2015 to Feb. 2019. He also disclosed between $115,000 and $300,000 in investments he held in the company, including corporate stock options and nonpublic stock.

A spokesperson for Boom confirmed that Kelly was a Boom adviser from 2015 until February 2019 when he resigned. She told the Free Beacon Kelly was not on the company's board of directors and had no voting or governance input. She also confirmed Ctrip's partnership with Boom.

"CTRIP made a minority investment in Boom in 2018 but had zero voting or governance rights, which is standard Boom protocol for any foreign investors. There was no involvement nor contact with anyone in the Chinese government as part of the CTRIP investment," said Megan Young, Boom's vice president for marketing.

"Regarding the Belt and Road initiative: Boom has never had any involvement with that initiative or any contact with Chinese officials related to the initiative," she added.

Ctrip, which was founded in 1999, is the largest online travel company in China with a virtual monopoly over the travel booking industry. The company disclosed in 2003 that one of its primary shareholders was the Shanghai municipal government, according to Securities and Exchange Commission records.

Ctrip is also deeply involved in the Chinese government’s Belt and Road Initiative. The company entered into strategic partnerships with the Italian and Hungarian governments last year, in concert with the countries signing on to the initiative. Ctrip has pledged its support for the Xi Jinping administration plan and also publishes an annual report on the state of Chinese international travel as it relates to Belt and Road.

The nationalistic initiative involves setting up Chinese-built ports, roads, high-speed railroads, airports, and other infrastructure projects in countries that enter into agreements with the Beijing government. U.S. officials and cybersecurity experts have called it a global security risk, noting the potential for Chinese "debt traps," espionage, and military encroachment.

In April 2018, Ctrip announced that it had made a "strategic investment" in Boom Technologies to develop the company’s  Mach-2.2 airliner, a supersonic aircraft capable of traveling over 1,400 miles per hour.

"Ctrip offers valuable expertise in the Chinese travel market, and we’re excited to work with their passionate, entrepreneurial team to bring supersonic travel to the region," Boom CEO Blake Scholl said in a press release.

Ctrip "holds near-total control of the Chinese travel market," according to researchers at Berkeley University. Last year, Ctrip joined Tencent and other major Chinese companies in boycotting the NBA after the general manager of the Houston Rockets tweeted his support for pro-democracy protesters in Hong Kong. Kelly was publicly silent on the controversy at the time, the Free Beacon reported. 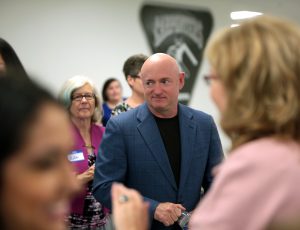