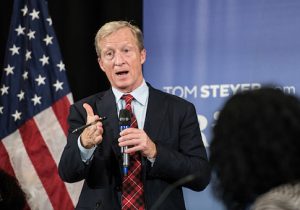 CHARLESTON, S.C.—California billionaire and political activist Tom Steyer told a group of about 120 people that Republicans are strategizing how to win elections in instances where they know they've failed to win a majority of the hearts and minds of voters, alleging that the party was using tactics such as gerrymandering, inconvenient polling locations, and voter registration "purges" to win.

"This is the perfect place to be," Steyer told the Charleston crowd. "This is a Republican-dominated state. When we think about the right to an equal vote, there is a determination right now to take away equal votes from people, largely by organized Republican interests."

"I truly believe that what Republicans are trying to do is figure out how to win with less than 50 percent" of the citizens, he added later.

The Tuesday night event was the first of a new round of town halls launched after the former hedge fund manager took out a full-page ad in USA Today just about two weeks after Election Day, a move interpreted by most political watchers as the strongest signal yet that the Democrats' largest funder from the 2018 cycle is going to run for the 2020 Democratic presidential nomination.

The USA Today ad and Steyer's website outline what he is calling his "5 rights" platform: the right to an equal vote, to clean air and water, to free college, to a living wage, and to health.

Speaking to reporters after the event, Steyer sidestepped questions about when he will decide if he's running or not.

"Well, I put out the ‘5 rights' as a challenge to the thousands of Democrats who want to run for president to see, because I believe we do need to be not incremental, but transformational in what we're trying to do in America," he said, when asked what it would take for him to run.

"But you're considering it though, right?" the reporter followed up.

The night was part town hall, part panel discussion, with the panel including local and national leaders such as NAACP President Derek Johnson.

Consensus among the panelists on what remedies were needed seemed difficult to obtain. For example, while one panelist said paper ballots intimidated voters, another panelist advocated paper-only balloting systems.

Others advocated for a national voting system, and many panelists talked about making Election Day a national holiday.

Alongside the repeated claims of systematic voter suppression, many of the panelists also noted that South Carolina had experienced a surge in turnout in the 2018 elections.

"There can definitely be voter suppression and high hurdles because the question is not ‘Was there high turnout?' but ‘What would the turnout have been if they hadn't suppressed the vote?'" he said.

Four more town halls detailing the other line items in his ‘5 rights' agenda are in the works, with the next scheduled for Dec. 13 in Fresno, California. The remaining three have not been scheduled, but a representative said they would likely be in the new year.

Steyer pointed out that he was purposefully holding his "right to an equal vote" town hall in the south, where Democrats have complained about voting procedures and processes after partial recounts in Florida still did not produce victories for them in two tightly contested races, one for Senate and one for governor.

Other Democrats have accused Republicans of sabotaging the Georgia governor's race.

"If Stacey Abrams doesn't win in Georgia, they stole it," Ohio Senator Sherrod Brown (D.,) said days before Abrams conceded. "It's clear. I say that publicly. It's clear."

Some in the crowd demanded the evening's discussion focus exclusively on impeachment, at which point one of the panelists tried to start a chant of "im-peach Trump. Im-peach Trump."

Those events dovetailed with voter registration efforts by Steyer's main political PAC, NextGen America, which claimed to have registered over 257,000 voters in about a dozen states this year.

At the same time, Steyer's "Need to Impeach" effort claimed just before Election Day that they had amassed about 6 million supporters, which some believe could serve as the base of support for a presidential run.