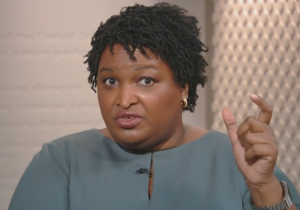 Abrams has claimed for months that Georgia Gov. Brian Kemp (R.) used voter suppression methods as secretary of state to win, and she essentially deemed his victory illegitimate. She refused to concede on election night in hopes of forcing a runoff, and despite eventually losing by more than 50,000 votes, Abrams said the election was an "erosion of our democracy."

Speaking at Vanderbilt University in Nashville, Tennessee, as part of the college's annual lecture series, she talked about her efforts to improve Georgia elections and her defiance of the usual graceful attitude of a defeated politician.

"I upend the tradition of politics where you’re supposed to be genteel, say everything is fine. I didn’t do that," she said Tuesday, according to the Atlanta Journal-Constitution. "I could fight just to fight, but the minute it becomes about me, it becomes a vanity project. ... That can’t be the reason you do things. And I spent that 10-day period plotting. Revenge can be very cathartic."

Abrams has boasted about not officially conceding the race to Kemp and even said last week that "I did win my election." She said Tuesday the election was neither "fair" nor "accurate," although reporting belies her account of being cheated.

"I don’t concede that I lost," Abrams said on Tuesday. "I acknowledge that I’m not the governor of Georgia. That’s made plain every day I don’t walk into the Governor’s Mansion."

Says Abrams: 'I don’t concede that I lost. I acknowledge that I’m not the governor of Georgia. That’s made plain every day I don’t walk into the Governor’s Mansion." #gapol

She also said she didn't care for Kemp personally and encouraged people to vote, even if out of spite, according to the Tennessean.

"I'm still sad, still angry, but I'm less bitter than I was. That has to be channeled into action, and that's what I'm trying to do," she said.

Abrams is receiving consideration as a possible 2020 presidential or vice-presidential candidate. She said she insists anyone running consider Georgia a swing state in the race. No Democratic nominee has won the Peach State since 1992, but Donald Trump only defeated Hillary Clinton by 5 points in 2016.