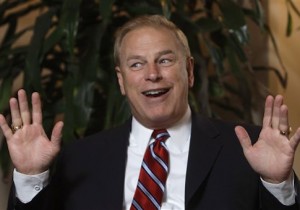 Ted Strickland, a Democratic candidate for Senate in Ohio, has raised more than $170,000 in campaign contributions from individuals in the Washington, D.C., metro area in the first three quarters of 2015.

Strickland, who served as governor of Ohio for one term between 2007 and 2011, has accepted thousands from D.C.-area attorneys, consultants, lobbyists, and government workers, according to a Washington Free Beacon analysis of campaign finance reports.

Nine of Strickland’s D.C. contributors are listed among the ranks of Democratic presidential candidate Hillary Clinton’s most elite fundraisers, or so-called "Hillblazers." Bundlers are awarded this title if they raise $100,000 or more for Clinton.

The former secretary of state, a Strickland ally, has encouraged voters to donate to the Ohio Senate candidate. Clinton opened a rally in Cleveland in August by urging supporters to "help Ted get elected to the United States Senate." Her husband, former President Bill Clinton, has formally endorsed Strickland.

Among Strickland’s most prominent Washington-area donors is Heather Podesta, a lobbyist who runs the largest female-owned government relations firm in D.C. and who is also one of Clinton’s top fundraisers. Podesta hosted a $2,700-per-head fundraiser for Clinton in July at her home. Her now ex-husband, lobbyist Tony Podesta, is another elite Clinton bundler who donated to Strickland’s campaign. He is also the brother of the chairman of Clinton’s presidential campaign, John Podesta.

Four employees of the Center for American Progress, including the organization’s senior vice president and executive vice president for policy, have contributed to Strickland’s senatorial campaign.

Strickland received his highest number of D.C. area contributions in the third quarter, raising more than $60,000 in itemized donations from individuals in the nation’s capital during that period. He raised nearly $55,000 from people living in Washington in both the first and second quarter.

Strickland has raised a total of $1.8 million in itemized donations from individuals since the start of the year, the funds from Washington representing about 10 percent of this total.

Strickland’s campaign has attacked incumbent Republican Sen. Rob Portman, who he will run against should he secure the Democratic nomination, for "looking out for the interests of billionaires" in Washington.

"From passing trade agreements that let his campaign donors ship Ohio jobs overseas, to voting to cut Medicare so he can increase tax breaks for millionaires, Sen. Portman is just one more millionaire in Washington looking out for the interests of billionaires," Strickland spokesman Dennis Willard said in August when Strickland revealed that he received a quarter million dollar salary from the Center for American Progress.

The former Ohio governor is behind on his fundraising. Strickland has raised a total of $2.7 million from individuals and political committees, just over 13 percent of the $20 million advisers said he would need by November 2016 in order to defeat Portman.

An Ohio Democratic Party official speaking on behalf of the Strickland campaign slammed Portman for catering to "special interests" in Washington.

"Whether it’s cutting Medicare, slashing Pell grants or shipping Ohio jobs overseas, Senator Portman has spent 25 years in Washington putting special interests ahead of working families in Ohio, and he’s been rewarded with more than $2 million from lawyers and lobbyists—which is no surprise given that Portman started his own career as a Washington insider by working as a lawyer for a D.C. lobbying firm," spokeswoman Jennifer Donohue said.

Before Strickland can face Portman, he will need to beat out 31-year-old Cincinnati city councilman P.G. Sittenfeld for the Democratic nomination. While the Ohio Democratic Party has already thrown its support behind Strickland, some prominent Ohio Democrats have formed a Super PAC backing Sittenfeld.

Both candidates delivered speeches earlier this month at a Democratic Party event in Cincinnati during which Strickland mentioned an upcoming fundraising tour across the East Coast.