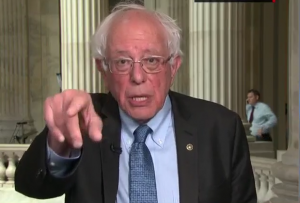 Sen. Bernie Sanders (I., Vt.) on Tuesday accused Republicans of opposing voting rights for inmates because they want to suppress the votes of minority communities.

CNN host Brooke Baldwin brought up Sanders's opinion piece in USA Today Tuesday calling for felons to be enfranchised which came after his headline-grabbing claim that the Boston Marathon bomber should be allowed to vote. Baldwin pointed out that polls show felons' voting rights placed low on Democratic voters' priority list, far below climate change, Medicare for All, gun control, and other issues.

Sanders said having to answer the question about felons voting on CNN is part of "how politics works" but he stands by his original answer, saying President Donald Trump and Republicans are infringing on voting rights, and so the proper response is repealing all restrictions.

"You pay a price when you commit a crime, but this is what I believe: At a time when the Republican Party and Donald Trump are working overtime to suppress the vote—to make it harder for people of color, poor people, young people to vote—we have got to make it clear, in my view, that if you are an American citizen, and even if you do something terrible, even if you're a bad person, we cannot take away your right to vote whether you are in jail or whether you left jail," Sanders said.

The senator argued preventing felons and inmates from voting is part of a Republican strategy to drive down voter turnout among minority communities.

"Clearly, what Republicans are doing is trying to deny people of color the right to vote and this is an issue I think we have to address head-on," he said.

"Even Democrats disagree with you," Baldwin said before Sanders interjected.

"Yeah, but let me say this," Sanders replied, waving his finger at the camera. "Four years ago, people disagreed with me on Medicare for all, raising the minimum wage to $15 an hour, criminal justice reform, spending a trillion dollars on rebuilding our infrastructure—people disagreed with me, they'll disagree with me now, but I'll tell you what I think, and that is: If you are a citizen of this country, you have the right to vote, and I will oppose all efforts to try to deny Americans the right to participate in our democracy."

Sanders cited Canada and Israel's practice of enfranchising felons to support America following suit. In the United States, Sanders's state, Vermont, and Maine allow felons to vote while in prison, while the rest of the country have a variety of regulations about how they may or may not have their voting rights reinstated after serving their time.

President Trump's decision to back criminal justice reform legislation last year was hailed by many as a step forward for minorities. And a new report shows not only are incarceration rates decreasing, but the number of black Americans in prison has dropped in absolute and per capita terms in the last decade.