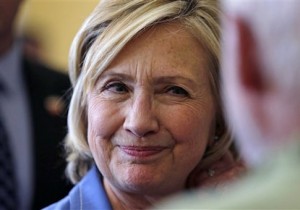 Hillary Clinton defended Planned Parenthood during remarks at a campaign stop in South Carolina on Thursday.

Life News reported that Clinton labeled the videos captured by the Center for Medical Progress that show Planned Parenthood officials discussing the sale of aborted baby body parts an "attack against women’s rights to choose."

"I don’t have all the facts but Planned Parenthood has apologized for the insensitivity of the employee who was taped and they will continue to answer questions for Congress and others, but for more than a century Planned Parenthood has provided essential services for women," Clinton declared Thursday. "Not just reproductive health services, including access to affordable family planning, but cancer screenings, for example and other health checkup."

The Democratic presidential candidate also called it "unfortunate" that the taxpayer-funded organization has endured such "concerted attacks" for its abortion practices.

"I think it is unfortunate that Planned Parenthood had been the object of such a concerted attacks for so many years and it’s really an attack against women’s rights to choose, to make the most personal, difficult decisions that any women would face based on her faith and her medical advice that she is given," Clinton explained. "So I am hoping that this situation will not further undermine the very important services that Planned Parenthood provides."

The remarks on the Planned Parenthood are Clinton’s first since two videos surfaced of top officials at the organization, one of whom is a doctor, touting the sale of body parts of aborted fetuses.

After the release of the second video Tuesday, Republican presidential candidate Carly Fiorina slammed Clinton for her "deafening silence" on the issue.

"Democrats have always fought for a policy that says it is not a life until it leaves the hospital," Fiorina said in a video message alongside pro-life leaders. "Hillary Clinton has fought to preserve that policy."

Hillary Clinton has received more campaign cash from Planned Parenthood—almost $10,000 from nine different employees—than all of her Democratic rivals.