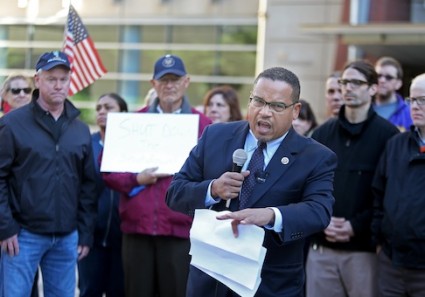 Ellison sent out an email to his supporters highlighting his participation in a Capitol Hill protest to raise the minimum wage. While demanding that Congress stop accepting money from corporations, Ellison also asked his supporters to make donations to the Restaurant Opportunities Center, the union-backed nonprofit worker center that is sponsoring the rally.

"Tomorrow, I am going to stand with workers and their families and demand my colleagues in Congress take action to raise the minimum wage and give working people back the power," he said in the email. "P.S.—If you can't make it tomorrow, support ROC United's work with a donation!  Click here to make a donation."

ROC was founded by hospitality union UNITE HERE following the September 11 terrorist attacks. While the group was originally designed to aid workers left unemployed by the destruction of the World Trade Center, it has emerged in recent years as an agent of agitation, staging protests outside eateries across the country, while advocating for higher wages.

UNITE HERE has endorsed the congressman throughout his career. Ellison has proven a reliable ally: in December, he lobbied President Obama to allow Smithsonian employees to join the union.

"It's time we kick corporate cash out of Congress," Ellison said in the email. "Demand [that] Congress stop accepting corporate cash from lobbies like the National Restaurant Association and start holding corporations accountable to paying their fair share—through wages and taxes—just like everyone else!"

"He’s soliciting donations for the group that already benefits from taxpayer dollars and it creates an echo chamber: ROC lobbies congress and then congress lobbies for ROC to receive grants and donations," Paranzino said.

Labor groups have been Ellison’s second largest donors since 2008, donating more than $650,000. His 2014 campaign and PAC has already collected more than $75,000 from unions, according to the Center for Responsive Politics, including $15,000 donations from SEIU and the United Food and Commercial Workers union, which have organized dozens of disruptive protests advocating for minimum wage hikes.

"Big Labor is not exactly a wallflower when it comes to lobbying and political clout," Paranzino said.