Excellence in Broadcasting: Celebrating the Talented Members of the MSNBC All-Decade Team

Every journalist who appears on television has courage. That's a given. But joining the elite ranks of the world's most noble profession requires something few possess—that rare combination of talent, charisma, grace, humility, eloquence, and cheeky bravado.

What a truly remarkable achievement, then, that one network—MSNBC—has managed to accumulate so many all-star journalists and contributors over the past 10 years. Congratulations to the members of the MSNBC All-Decade Team! 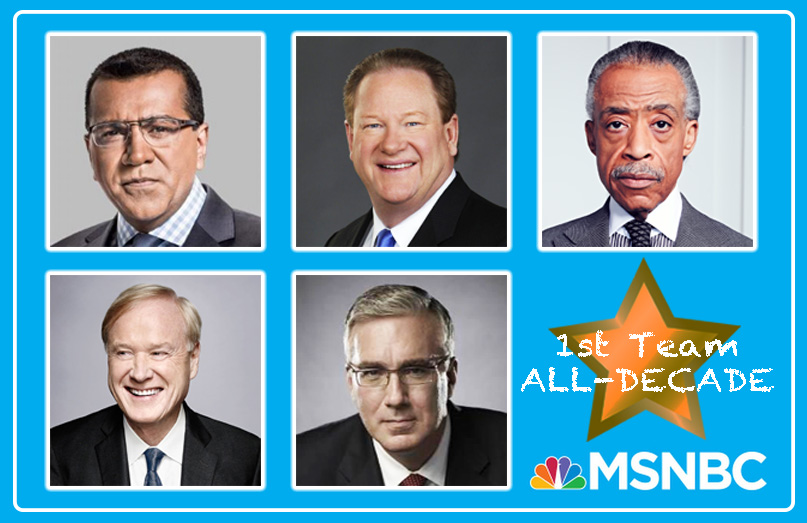 Martin Bashir: Forced to resign after suggesting someone defecate in Sarah Palin's mouth and suggested that criticizing the IRS was the modern-day equivalent of using the n-word.

Al Sharpton: Former fat activist, forced to concede defeat in his ongoing war against the teleprompter when his weekday show—PoliticsNation—was relegated to the weekend due to low ratings.

Chris Matthews: Forced to resign after admitting to inappropriate sexual behavior on set, compared the early success of Sen. Bernie Sanders's (I., Vt.) presidential campaign to the successful Nazi invasion of France in 1940, and suggested it was racist to oppose President Obama or to call him "Obama."

Keith Olbermann: Suspended for donating to Democratic candidates and forced to apologize for describing former Sen. Scott Brown (R., Mass.) as "an irresponsible, homophobic, racist, reactionary, ex-nude model, tea-bagging supporter of violence against women and against politicians with whom he disagrees." 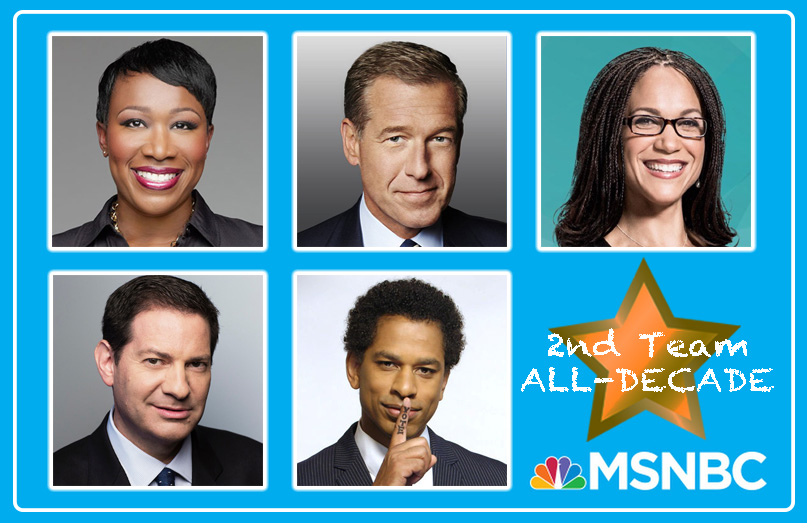 Joy-Ann Reid: Forced to apologize, but never punished, for a series of homophobic blog posts that resurfaced in 2018. Despite apologizing and accepting responsibility for the posts, Reid later claimed she was the victim of a malicious hacker who planted "fabricated" posts on her old blog. FBI cybersecurity experts were called in to investigate, but have yet to identify the hacker.

Brian Williams: Suspended in 2015 for telling false war stories about coming under fire in Iraq, continues to struggle with basic math.

Melissa Harris-Perry: Show canceled due to low ratings and the host's preference for discussing Beyoncé music videos instead of politics, forced to apologize for making fun of Mitt Romney's adopted black grandchild. Once described as "America's foremost public intellectual," she once argued that the word "Obamacare" was racist.

Touré: Former cohost of The Cycle forced to apologize for sexual harassment in 2019, hired despite publicly suggesting there was something "really fishy" about the 9/11 terrorist attacks. 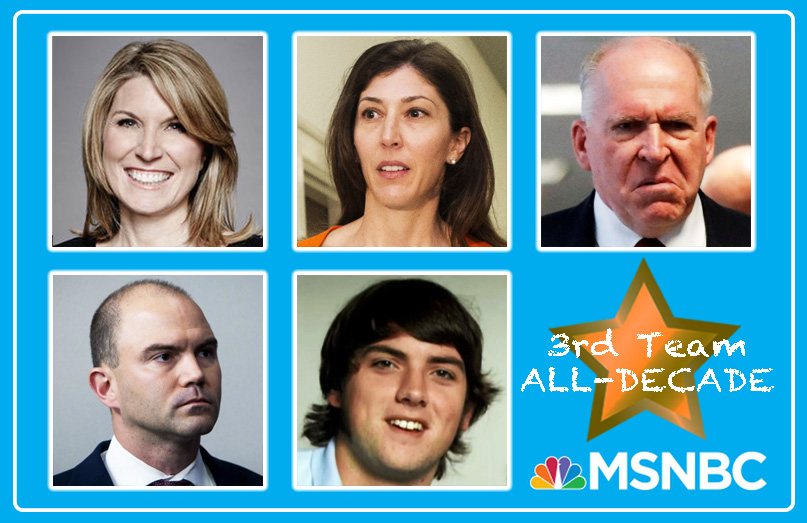 Nicolle Wallace: Former Republican operative best known for fawning over Democrats, dating sources, and comparing everything Trump does to Hitler.

Lisa Page: Recently hired as a legal analyst, the former FBI lawyer is best known for having an extramarital affair with colleague Peter Strzok, who led the bureau's investigation into the Trump campaign's so-called "collusion" with Russia.

Luke Russert: Prominent son best known for wearing a sport jersey in public and being rich enough to quit his job in 2016 in order to find himself.