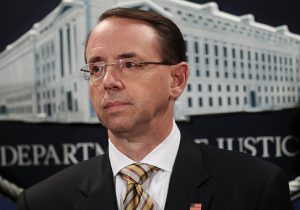 The White House issued a statement that Deputy Attorney General Rod Rosenstein and President Donald Trump will meet on Thursday upon Trump's return to Washington.

White House press secretary Sarah Huckabee Sanders said Trump and Rosenstein had an "extended conversation" about recent news stories; among the key ones was a Friday report that Rosenstein mulled wearing a wire to record Trump and talked about the "25th Amendment" process to have him replaced. Rosenstein denied the report.

Trump said in an interview over the weekend that he would have to see all the facts about Rosenstein.

"At the request of Deputy Attorney General Rod Rosenstein, he and President Trump had an extended conversation to discuss the recent news stories. Because the President is at the United Nations General Assembly and has a full schedule with leaders from around the world, they will meet on Thursday when the President returns to Washington, D.C," Sanders said.

CNN and Axios reported he had offered his resignation in anticipation of being fired by Trump. NBC News reported he had not resigned and would have to be fired to leave his position—his post holds particular significance as he oversees special counsel Robert Mueller's Russia investigation.

Axios updated its story to show Rosenstein offered his resignation in a conversation with Kelly, but it was unclear whether it was accepted.

It's the latest chapter in tensions between Trump and the Justice Department. Trump has publicly attacked Attorney General Jeff Sessions numerous times since the onset of the Russia investigation, blaming him for recusing himself from the probe.