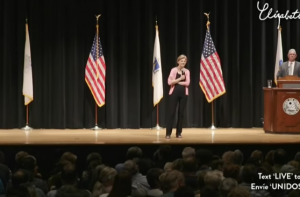 Massachusetts Sen. Elizabeth Warren (D.) was confronted at a town hall Thursday for calling the U.S. criminal justice system "racist from front to back."

Warren had made that comment during a Q&A session hosted by Rep. Cedric Richmond (D., La.), chairman of the Congressional Black Caucus, at Dillard University in New Orleans.

The questioner at Warren's town hall prefaced his question as being from a "young American of color."

"Your recent comments that you made in New Orleans are just a little but concerning to me. You said the justice system is ‘racist from front to back.' I'm just concerned that your rhetoric there is inciting some of the division that you claim the president is purporting," he said.

He mentioned the scope of black involvement in the criminal justice system.

"You say Donald Trump undermines the justice system but it highly concerns me that you made a blanket statement that the over 400 judges of color, thousands of law enforcement officers of color, and even the new black Police Commissioner of Boston are racist," he said.

He ended the question by asking whether it was beneficial to blanketly claim the entire criminal justice system is racist.

After Warren thanked him for the question, she asked if he saw the Dillard University interview in question.

He replied that he had, but Warren said if he did, he would know she wasn't talking about any particular ‘individual.'

"I didn't call any individual anything. What I was talking about is a system that has a lot of good people in it," she said.

"[Those people] have dedicated their lives to getting out there to try to build a justice system that works and who themselves have come forward and said, ‘this system needs reform. It needs significant reform.'"

Warren, considered a top contender to potentially make a run for president in 2020, also said during the Dillard University interview that President Donald Trump made her reconsider running for president, according to the Associated Press.

Facing re-election to the Senate this year, Warren did not directly address her 2020 plans. But when Richmond asked her what might have changed since she decided not to run in 2016, the senator was ready.

"Two words: Donald Trump," Warren said, before shifting to warn the audience that the November midterm vote is the immediate fight as Democrats try to break GOP control of Congress.