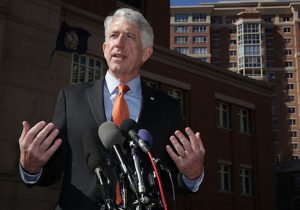 Virginia Attorney General Mark Herring (D.) released a statement on Wednesday in which he admits to wearing blackface during a college party in 1980.

"In 1980, when I was a 19-year-old undergraduate in college, some friends suggested we attend a party dressed like rappers we listened to at the time, like Kurtis Blow, and perform a song," Mark Herring wrote in a statement. "It sounds ridiculous even now writing it. But because of our ignorance and glib attitudes — and because we did not have an appreciation for the experiences and perspectives of others — we dressed up and put on wigs and brown makeup."

Herring is the latest of Virginia Democratic officials who are in the middle of public-relations disasters.

Gov. Ralph Northam (D.) started the wave of scandals when a photo surfaced last Friday showing a man in a Ku Klux Klan hood next to a man wearing blackface. The photo was on Northam's Eastern Virginia Medical School yearbook page. Northam apologized for the photo at first, but then during a press conference denied he was one of the individuals in the photo.

Virginia Lt. Gov. Justin Fairfax (D.) faces a sexual assault allegation. Vanessa Tyson, an associate professor of politics at Scripps College in Claremont, Calif., came forward publicly as the woman accusing Fairfax of sexually assaulting her in 2004 at the Democratic National Convention. Fairfax has denied the allegation, saying he and the woman were intimate in a consensual way during the convention. Fairfax released a new statement on Wednesday in which he continued to deny the allegation but stated that women don't make such allegations "lightly." The statement came before NBC reported that Fairfax used crude language about Tyson during a Monday night meeting.

Herring said he feels the greatest shame he has ever felt and that will have discussions about whether he can continue to serve as attorney general.

"That I have contributed to the pain Virginians have felt this week is the greatest shame I have ever felt. Forgiveness in instances like these is a complicated process, one that necessarily cannot and should not be decided by anyone but those directly affected by the transgressor, should forgiveness be possible or appropriate at all," Herring said. "In the days ahead, honest conversations and discussions will make it clear whether I can or should continue to serve as attorney general, but no matter where we go from here, I will say that from the bottom of my heart, I am deeply, deeply sorry for the pain that I cause with this revelation."

Herring called on Northam to resign on Saturday.