MSNBC anchors Ali Velshi and Stephanie Ruhle help us "get a little smarter" every weekday at 11 a.m. EST on their cleverly named program "Velshi & Ruhle," but they are no mere newsreaders.

Ruhle also loves to deliver direct-to-camera admonitions, often aimed at either President Donald Trump or Ivanka Trump, that might appear to undercut her appearance of objectivity but are really just devastating truth-bombs, with Velshi nodding along and adding a "yeah" or "that's right" as Ruhle gets going.

We couldn't help but notice their similarities to another pair of fearless fact-tellers: Lynnette Hardaway and Rochelle Richardson, best known as Trump Train duo "Diamond and Silk." Silk is the Velshi to Diamond's Ruhle, providing strong backup as her sister goes on blistering screeds against the enemies of the White House.

Diamond and Silk also frequently appear on Fox News, MSNBC's chief rival in ratings and politics. It only makes sense that MSNBC would finally emulate its opponent's success by giving a daily show to its version of this peerless pair. 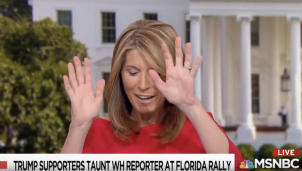 Nicolle Wallace Is Stunned By That