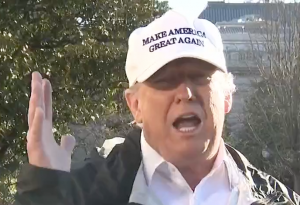 President Donald Trump said Thursday on the White House lawn that not only would a border wall pay for itself, but it will also still be paid for indirectly by Mexico if Congress approves his new trade deal.

Trump spoke in front of cameras for several minutes, mostly about the wall and the subsequent budget impasse with Democrats in Congress, and defended his stance on border security.

He credited border security agents with doing "record apprehensions" but said they need the wall to work more effectively and save money.

"I really believe the steel barrier or wall would pay for itself every three or four months and maybe better than that, in terms of overall," he said, repeating an argument he made in Tuesday's Oval Office address.

He said Democrats may want to hold the deal up simply to hamper the government and position for the 2020 presidential election.

"It has to be approved by Congress," Trump said. "It probably will be other than maybe they hold that up because they want to do as much harm as they can—only because of the 2020 presidential election. So Mexico is paying for the wall indirectly."