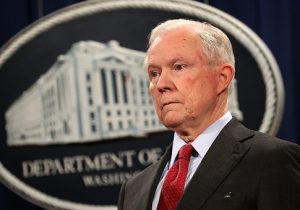 The Trump administration escalated its war with California’s sanctuary immigration policy late Tuesday by suing the state over its laws preventing local law enforcement from working with federal authorities to detain and possibly later deport illegal immigrants who have committed crimes in the state.

The Justice Department sued the state of California, along with its Gov. Jerry Brown and Xavier Becerra, the state's attorney general, for passing and enforcing its sanctuary laws, which place sharp limits on how local law enforcement agencies can communicate with federal immigration authorities.

Attorney General Jeff Sessions will deliver a speech at a law enforcement event in Sacramento Wednesday in which he will pledge to fight what he characterized as "unjust, unfair, and unconstitutional policies that have been imposed on" California sheriffs and other law enforcement interests.

"California has no authority to enforce laws that obstruct or otherwise conflict with, or discriminate against, federal immigration enforcement efforts," the Justice Department said in its lawsuit, which claimed that the federal government has "undoubted, preeminent authority to regulate immigration matters."

Brown issued a statement Tuesday deeming the lawsuit a "political stunt" and said it and Sessions's Wednesday speech in Sacramento would further "divide and polarize America."

"At a time of unprecedented political turmoil, Jeff Sessions has come to California to further polarize America," he said. "Jeff, these political stunts may be the norm in Washington, but they don’t work here. SAD!!!"

Last fall, the California legislature passed the "California Values Act," which tried to insulate the heavily Democratic state from the administration's immigration policies.

Sessions has vowed to withhold federal grants for states that refuse to cooperate with Immigration and Customs Enforcement (ICE) requests to hold illegal immigrants arrested or convicted of crimes until federal authorities can pick them up and potentially deport them.

A federal judge on Monday rejected a request from the state of California to put a halt to the Trump administration policy of penalizing sanctuary city and state measures aimed at protecting illegal immigrants.

U.S. District Court Judge William Orrick said the legal issues involved are murky and do not clearly favor a preliminary a state-mandated injunction against the Trump administration's immigration policies. Orrick rejected a request from the state to place a court-ordered stop to federal policies aimed at punishing sanctuary cities and states, along with other jurisdictions.

However, in his 28-page opinion he did not rule out eventually ruling in California's favor in the case.

"The issues in this case will benefit from further development," he wrote. "I find that the state has not demonstrated that I should issue a preliminary injunction at this time."

California sheriffs have called on the GOP-controlled Congress to intervene and pass federal law to change the state’s sanctuary status, arguing that the law ties their hands too tightly and will only increase the chances of another high-profile tragedy.

The sheriffs have predicted that the law will open the door to another high-profile tragedy similar to Kathryn "Kate" Steinle's death in 2015 at the hand of an illegal immigrant who had been deported a total of five times.

The state's sheriffs say the law limits their ability to remove dangerous, repeat offenders from their communities. They remain concerned despite late changes that Gov. Brown helped negotiate that would grant police the ability to inform Immigration and Customs Enforcement officials of violent felons who police have taken into custody.

Sheriffs said the law would prevent police from notifying ICE of self-admitted members of MS-13 or other gangs if they were arrested for misdemeanor crimes such as assault and battery, possession of narcotics, being under the influence of narcotics, or driving without a license.

Police also worry that the law is too light on illegal immigrants who have been arrested for drunk driving. Police can only call federal immigration authorities if they arrest an illegal immigrant with a violent felony on his or her record. In California, a person must be convicted four times in a decade for it to be considered a felony, law enforcement sources said.