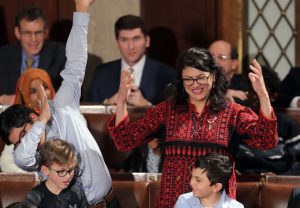 Rep. Rashida Tlaib (D., Mich.), fresh from calling the President of the United States a "motherfucker," claimed Sunday that senators who support proposed foreign policy legislation act as if they "represent" a country other than the United States.

Tlaib retweeted a story from the Intercept about legislation shared, and also criticized, on Twitter by Sen. Bernie Sanders (I., Vt.). The legislation includes a number of foreign policy provisions concerning Syria, Jordan, Israel and others. Among other measures, the bill responds to efforts in the United States to interfere with Israeli policy.

Political efforts, including the Boycott, Divestment and Sanctions (BDS) movement, target Israeli organizations and companies doing business in Israel in an effort to erode support for the state of Israel and pressure the Israeli government to change its policies. The bill would allow the federal government to refrain from working with organizations that refuse to work with the Israeli government. A previous bill introduced its priorities, and Sen. Marco Rubio (R., Fla.) reintroduced them with the start of the new Congress in the form of S.1, the Intercept reports.

In the previous Congress, that measure was known as S.170, and it gives state and local governments explicit legal authority to boycott any U.S. companies which themselves are participating in a boycott against Israel. As the Intercept reported last month, 26 states now have enacted some version of a law to punish or otherwise sanction entities which participate in or support the boycott of Israel, while similar laws are pending in at least 13 additional states. Rubio’s bill is designed to strengthen the legal basis to defend those Israel-protecting laws from constitutional challenge.

In response to the story, Tlaib accused the senators supporting the bill of having "forgot[ten] what country they represent." Though Tlaib does not mention Israel by name, she references "boycotting," which would presumably refer only to the Israeli portion of the bill. The implication is that the senators think they represent Israel, not the United States.

They forgot what country they represent. This is the U.S. where boycotting is a right & part of our historical fight for freedom & equality. Maybe a refresher on our U.S. Constitution is in order, then get back to opening up our government instead of taking our rights away. https://t.co/KkmqjR58ZM

The comment was quickly condemned by a number of American Jews. Seth Mandel, Washington Examiner magazine executive editor, called it "the dual-loyalty accusation," and wondered whether reporters would be asking Democrats to condemn the comments. Jonathan Greenberg, a senior fellow at the Salomon Center, wondered whether "someone is gonna keep track of how many classically anti-Semitic tropes Rep. Tlaib chalks up. She’s off to a flying start." Howard Lovy, a Jewish author,  called it the "old anti-Semitic ‘dual loyalty’ garbage … when the first thing she raises is the ancient specter of Jewish disloyalty, you know this is going to be a rough ride."

The accusation that Jewish Americans are loyal to Israel as opposed to their country of citizenship is a classic anti-Semitic canard. A 2018 publication from the Begin-Sadat Center for Strategic Studies argues that, "[i]n its most extreme form, the charge of dual loyalty amounts to an accusation of treason." The Center explained that the accusation was pervasive and unsubstantiated:

The 2014 ADL Global 100 study also found that the false accusation of dual loyalty is the main international anti-Semitic stereotype. Forty-one percent of the world populations included in the survey believe this to be true, which, if extrapolated out to the total populations of those countries, would translate to approximately 1.7 billion people.

It is easy to show that on basic issues of great importance to Israel, the accusation that American Jews feel a dual loyalty is a slander. So far, Donald Trump has been an extremely pro-Israeli president. If US Jews did in fact feel a dual loyalty, the great majority of them would likely support him. Yet in 2016, 71% of them voted for Hillary Clinton, far exceeding what she received on the national scale (48%). Only 24% of US Jews voted for Trump. In the newly elected Congress, a host of Jewish Democrat committee heads are expected to attack the president in a major way.

Tlaib, however, is not alone to suggest American senators are under the undue influence of Jews. A 2014 ADL report found 11 percent of Americans believed that Jews exercised too much control over the federal government.

One of Tlaib's allies in the House, Rep. Ilhan Omar (D., Minn.), has made similar accusations. In a 2012 tweet, Omar accused Israel of having "hypnotized" the world.

During her congressional campaign, Omar spoke in a Minnesota synagogue and claimed to oppose anti-Israel measures, including BDS. Immediately after she won election to the House, Omar came out in support of it.

After Tlaib won her congressional primary, the New York Times described how "Ms. Tlaib's mother draped her in the Palestinian flag as she spoke." Tlaib told the Huffington Post she still has family living in the Middle East, and intends to "be a voice for them" in Congress.

Speaking on C-SPAN radio the morning before Tlaib took office, her brother said, "I'm proud of you. I can't wait to see you getting sworn in on Jefferson’s Quran and wearing the Palestinian flag." Tlaib then took the oath of office while adorned in Palestinian garb. One week later, Tlaib is now suggesting senators who support a pro-Israel bill are disloyal to the United States.

Tlaib accused the bill making its way through the Senate of "taking our rights away." Sanders claimed that the bill would "punish" Americans for engaging "in political activity."

The bill is officially titled "A bill to make improvements to certain defense and security assistance provisions and to authorize the appropriation of funds to Israel, to reauthorize the United States-Jordan Defense Cooperation Act of 2015, and to halt the wholesale slaughter of the Syrian people, and for other purposes."

S.1, should the Democrats who supported the previous version remain committed, could pass the Republican-controlled Senate in a veto-proof bipartisan fashion. In addition, 26 states have legislation concerning boycotts or political measures targeting Israel. Another 13 have similar bills pending in state legislatures.