Newly discovered audio recordings of Hillary Clinton from the early 1980s include the former first lady’s frank and detailed assessment of the most significant criminal case of her legal career: defending a man accused of raping a 12-year-old girl.

In 1975, the same year she married Bill, Hillary Clinton agreed to serve as the court-appointed attorney for Thomas Alfred Taylor, a 41-year-old accused of raping the child after luring her into a car.

The recordings, which date from 1983-1987 and have never before been reported, include Clinton's suggestion that she knew Taylor was guilty at the time. She says she used a legal technicality to plead her client, who faced 30 years to life in prison, down to a lesser charge. The recording and transcript, along with court documents pertaining to the case, are embedded below.

The full story of the Taylor defense calls into question Clinton’s narrative of her early years as a devoted women and children’s advocate in Arkansas—a narrative the 2016 presidential frontrunner continues to promote on her current book tour.

Her comments on the rape trial are part of more than five hours of unpublished interviews conducted by Arkansas reporter Roy Reed with then-Arkansas Gov. Bill Clinton and his wife in the mid-1980s.

The interviews, archived at the University of Arkansas in Fayetteville, were intended for an Esquire magazine profile that was never published, and offer a rare personal glimpse of the couple during a pivotal moment in their political careers.

But Hillary Clinton’s most revealing comments—and those most likely to inflame critics—concern the decades-old rape case.

‘The Prosecutor Had Evidence’ 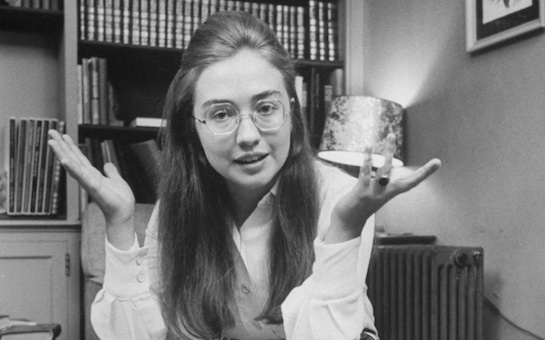 Twenty-seven-year-old Hillary Rodham had just moved to Fayetteville, and was running the University of Arkansas’ newly-formed legal aid clinic, when she received a call from prosecutor Mahlon Gibson.

"The prosecutor called me a few years ago, he said he had a guy who had been accused of rape, and the guy wanted a woman lawyer," said Clinton in the interview. "Would I do it as a favor for him?"

The case was not easy. In the early hours of May 10, 1975, the Springdale, Arkansas police department received a call from a nearby hospital. It was treating a 12-year-old girl who said she had been raped.

The suspect was identified as Thomas Alfred Taylor, a 41-year-old factory worker and friend of the girl’s family.

And though the former first lady mentioned the ethical difficulties of the case in Living History, her written account some three decades later is short on details and has a far different tone than the tapes.

"It was a fascinating case, it was a very interesting case," Clinton says in the recording. "This guy was accused of raping a 12-year-old. Course he claimed that he didn’t, and all this stuff" (LISTEN HERE).

Describing the events almost a decade after they had occurred, Clinton’s struck a casual and complacent attitude toward her client and the trial for rape of a minor.

"I had him take a polygraph, which he passed – which forever destroyed my faith in polygraphs," she added with a laugh.

Clinton can also be heard laughing at several points when discussing the crime lab’s accidental destruction of DNA evidence that tied Taylor to the crime.

From a legal ethics perspective, once she agreed to take the case, Clinton was required to defend her client to the fullest even if she did believe he was guilty.

"We’re hired guns," Ronald D. Rotunda, a professor of legal ethics at Chapman University, told the Washington Free Beacon. "We don’t have to believe the client is innocent…our job is to represent the client in the best way we can within the bounds of the law."

However, Rotunda said, for a lawyer to disclose the results of a client’s polygraph and guilt is a potential violation of attorney-client privilege.

"You can’t do that," he said. "Unless the client says: ‘You’re free to tell people that you really think I’m a scumbag, and the only reason I got a lighter sentence is because you’re a really clever lawyer.’"

Clinton was suspended from the Arkansas bar in March of 2002 for failing to keep up with continuing legal education requirements, according to Arkansas judicial records.

Public records provide few details of what happened on the night in question. The Washington County Sherriff’s Office, which investigated the case after the Springdale Police Department handled the initial arrest, said it was unable to provide an incident report since many records from that time were not maintained and others were destroyed in a flood.

A lengthy yet largely overlooked 2008 Newsday story focused on Clinton's legal strategy of attacking the credibility of the 12-year-old victim.

The girl had joined Taylor and two male acquaintances, including one 15-year-old boy she had a crush on, on a late-night trip to the bowling alley, according to Newsday.

Taylor drove the group around in his truck, pouring the girl whisky and coke on the way.

The group later drove to a "weedy ravine" near the highway where Taylor raped the 12-year-old.

Around 4 a.m., the girl and her mother went to the hospital, where she was given medical tests and reported that she had been assaulted.

Taylor was arrested on May 13, 1975. The court initially appointed public defender John Barry Baker to serve as his attorney. But Taylor insisted he wanted a female lawyer.

The lawyer he would end up with: Hillary Rodham.

According to court documents, the prosecution’s case was based on testimony from the 12-year-old girl and the two male witnesses as well as on a "pair of men’s undershorts taken from the defendant herein."

In a July 28, 1975, court affidavit, Clinton wrote that she had been informed the young girl was "emotionally unstable" and had a "tendency to seek out older men and engage in fantasizing."

"I have also been told by an expert in child psychology that children in early adolescence tend to exaggerate or romanticize sexual experiences and that adolescents in disorganized families, such as the complainant’s, are even more prone to exaggerate behavior," Clinton said.

Clinton said the child had "in the past made false accusations about persons, claiming they had attacked her body" and that the girl "exhibits an unusual stubbornness and temper when she does not get her way."

But the interview reveals that an error by the prosecution would render unnecessary these attacks on the credibility of a 12-year-old rape victim.

‘We had a lot of fun with Maupin’ 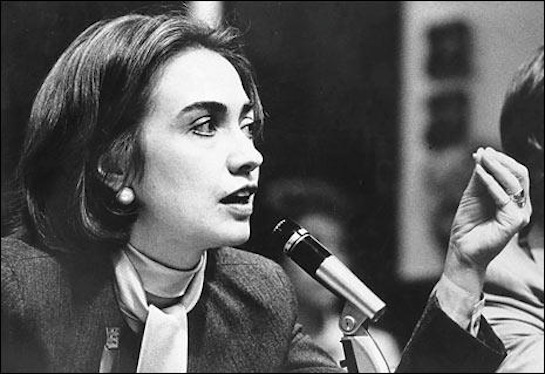 "You know, what was sad about it," Clinton told Reed, "was that the prosecutor had evidence, among which was [Taylor’s] underwear, which was bloody."

Clinton wrote in Living History that she was able to win a plea deal for her client after she obtained forensic testimony that "cast doubt on the evidentiary value of semen and blood samples collected by the sheriff's office."

She did that by seizing on a missing link in the chain of evidence. According to Clinton’s interview, the prosecution lost track of its own forensic evidence after the testing was complete.

"The crime lab took the pair of underpants, neatly cut out the part that they were gonna test, tested it, came back with the result of what kind of blood it was what was mixed in with it – then sent the pants back with the hole in it to evidence," said Clinton (LISTEN HERE). "Of course the crime lab had thrown away the piece they had cut out."

Clinton said she got permission from the court to take the underwear to a renowned forensics expert in New York City to see if he could confirm that the evidence had been invalidated.

"The story through the grape vine was that if you could get [this investigator] interested in the case then you had the foremost expert in the world willing to testify, so maybe it came out the way you wanted it to come out," she said.

She said the investigator examined the cut-up underwear and told her there was not enough blood left on it to test.

When Clinton returned to Arkansas, she said she gave the prosecutor a clipping of the New York forensic investigator’s "Who’s Who."

"I handed it to Gibson, and I said, ‘Well this guy’s ready to come up from New York to prevent this miscarriage of justice,’" said Clinton, breaking into laughter.

"So we were gonna plea bargain," she continued.

When she went before Judge Cummings to present the plea, he asked her to leave the room while he interrogated her client, she said.

"So that was Maupin [Cummings], we had a lot of fun with Maupin," Clinton added.

Reed asked what happened to the rapist.

When asked why Taylor wanted a female lawyer, Clinton responded, "Who knows. Probably saw a TV show. He just wanted one."

Taylor, who pleaded to unlawful fondling of a chid, was sentenced to one year in prison, with two months reduced for time served. He died in 1992.

‘Is This About That Rape of Me?’ 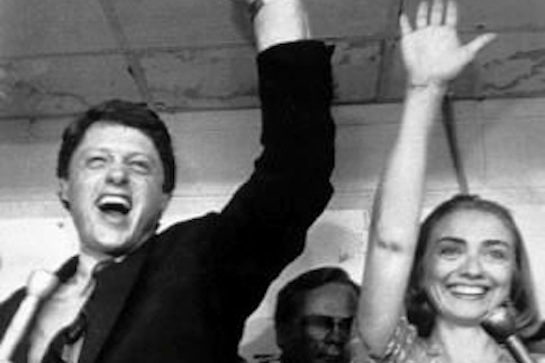 Neither Reed nor a spokesman for Hillary Clinton returned a request for comment.

The Taylor case was a minor episode in the lengthy career of Clinton, who writes in Living History, before moving on to other topics, that the trial inspired her co-founding of the first rape crisis hotline in Fayetteville.

Clinton and her supporters highlight her decades of advocacy on behalf of women and children, from her legal work at the Children's Defense Fund to her women's rights initiatives at the Bill, Hillary, and Chelsea Clinton Foundation.

And yet there are parallels between the tactics Clinton employed to defend Taylor and the tactics she, her husband, and their allies have used to defend themselves against accusations of wrongdoing over the course of their three decades in public life.

In the interview with Reed, Clinton does not mention the hotline, nor does she discuss the plight of the 12-year-old girl who had been attacked.

Now 52, the victim resides in the same town where she was born.

Divorced and living alone, she blames her troubled life on the attack. She was in prison for check forgery to pay for her prior addiction to methamphetamines when Newsday interviewed her in 2008. The story says she harbored no ill will toward Clinton.

According to her, that is not the case.

"Is this about that rape of me?" she asked when a Free Beacon reporter knocked on her door and requested an interview.

Declining an interview, she nevertheless expressed deep and abiding hostility toward the Newsday reporter who spoke to her in 2008—and toward her assailant’s defender, Hillary Rodham Clinton.

Listen to the audio: