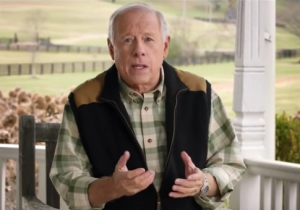 Tennessee Democrat Phil Bredesen took offense this week to being called a "liberal," accusing Vice President Mike Pence of "name-calling." But state Republicans say Bredesen has a blind-spot for actual name-calling from his side, pointing to "despicable rhetoric" from one of his top communications officials.

Republican aides in the state directed the Washington Free Beacon to Mark Brown, a top communications official for the Tennessee Democratic Party acting as spokesman for its efforts to help Bredesen win his 2018 Senate race. Brown has taken the name-calling to a level beyond calling people "liberal," dishing out labels ranging from "fuckstik" (sic) to "Putin's bitch" for President Donald Trump.

The rhetoric from Brown isn't in synch with the message from Bredesen, who is hoping to flip a Tennessee Senate seat blue by running as a centrist who could "work together" with Republicans in Washington, D.C.

A Few Thoughts About This Photo https://t.co/xr0Z0uLMA2 Exactly, fuck "reaching out" to Trump voters. The idiots aren't listening.

In the past year alone, Brown has hurled numerous epithets at Trump:

@realDonaldTrump You are Putin's bitch and a #FuckingMoron.

Brown has also expressed his belief that both evangelical Christians and America as a whole are "racist."

The Tennessee Democratic Party did not return a Tuesday request for an interview with Brown and comment on his rhetoric. Bredesen's campaign also didn't respond to a request for comment.

Scott Golden, the chairman of the Tennessee Republican Party, said the "hateful comments" from Brown were "reprehensible." He labeled Brown a "professional Twitter troll" who has been "expressing his party's true sentiments about President Trump."

"Phony Phil Bredesen is complaining about the Vice President calling him out for what he is: a liberal," Golden said. "Meanwhile, professional Twitter troll and Tennessee Democratic Party spokesman Mark Brown has been doing Bredesen’s dirty work and expressing his party’s true sentiments about President Trump."

Tennessee Democrats won't officially nominate Bredesen as its candidate until August 2, though the party has already put its support behind the state's former governor.