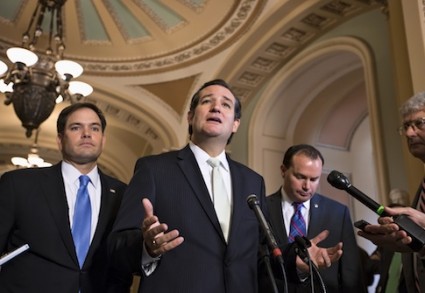 Lawmakers on both sides of the aisle used the Sunday shows to attempt to shift blame as a government shutdown looms.

"It is the Democrats who have taken the absolutist position," Sen. Ted Cruz (R., Texas) said on "Meet the Press."

"I'd like to repeal every word of the law, but that wasn't my position even in this fight. My position in this fight was we should defund it, which is different from repeal."

"And even now what the House of Representatives has done is a step removed from defunding. It's delaying it. Now that's the essence of a compromise," Cruz said. "On the other side what have the Democrats compromised on? Nothing. Zero."

Democrats maintain it is the Republicans who are refusing to compromise.

"800,000 federal workers will be the victims of this Republican shutdown strategy, but even more important it hurts our economy," Sen. Dick Durbin (D., Ill.) said on Face the Nation. "The leaders in business tell us, ‘don't do this, don't shutdown the government, don't fail to pay the governments bills with the debt ceiling.’ And that's exactly what the Republicans are hell bent on doing."

"I put forward a motion asking the speaker of the House to appoint budget negotiators so we could work out all these issues," Van Hollen said.

Rep. Kevin McCarthy (R., Calif.) reiterated that the Republicans do not want to shut the government down but they intend to continue this fight because it is ultimately better for job growth and the American people on "Fox News Sunday."

"[President Obama] has signed seven bills that have changed provisions inside Obamacare […] There are seventy Democrats sitting in that House today that have voted for one form or another of that. So there is the support," he said.

"You have the president, ten times this year, every single month, delaying a portion of Obamacare. Just last week he did it while he was criticizing us for delaying it," McCarthy said.

The House passed two amendments Saturday evening to the continuing resolution and separate legislation that would ensure military personnel will be paid if a government shut down occurs.

One of the amendments stipulates a one-year delay in implementing the Affordable Care Act. The other fully repeals the medical device tax, but Democrats say neither amendment is something they will agree to.

Sen. Tim Kaine (D., Va.) said on "Fox News Sunday" he did expect the military legislation to pass the Senate.