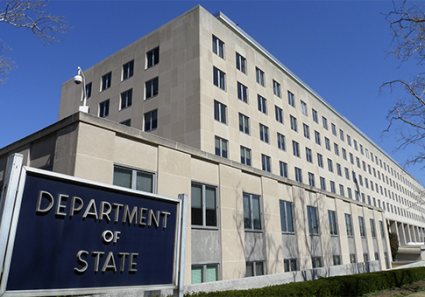 As a bureau of the U.S. State Department comes under fire for paying hundreds of thousands of dollars for Facebook "likes," current and former employees have described the bureau as wasteful, unaccountable, and lacking a coherent mission.

"Every government bureaucracy on the face of the Earth experiences turf wars, morale issues, infighting and red tape," the Cable reported on Sunday. "Then there’s the State Department’s Bureau of International Information Programs (IIP)."

The IIP says it "provides and supports the places, content, and infrastructure needed for sustained conversations with foreign audiences to build America's reputation abroad."

The bureau was scrutinized last month after the State Department’s inspector general revealed that it had paid $630,000 for "likes" on its Facebook page.

As the bureau searches for a new leader, officials interviewed by the Cable describe a dysfunctional office that has failed to establish a cogent role for itself, due in large measure to a lack of effective leadership.

This new technocrat will attempt to address a scathing Inspector General report from May describing a "pervasive perception of cronyism" at the bureau where "leadership fostered an atmosphere of secrecy, suspicion and uncertainty" and where staff "describe the … atmosphere as toxic and leadership's tolerance of dissenting views as non-existent." One might assume a massive overhaul is needed, but employees already complain of "reorganization fatigue" from previous attempts to reorganize the bureau. […]

"It’s the redheaded stepchild of public diplomacy," said a former congressional staffer with knowledge of the bureau. "The head of it isn’t even an assistant secretary. That doesn’t sound like much. But when you’re trying to throw your weight around the State Department, it matters. Why should people take you seriously? You have a shitty budget, you have a crappy product and you don’t even have to be congressionally confirmed." […]

Others pointed to IIP's transient environment where many appeared to be playing musical chairs. "I can't tell you how many of my colleagues are either looking for jobs outside of IIP or actively applying for them," said a current IIP contractor. "The problem is no one wants to hire us at Main State because they don't respect us."