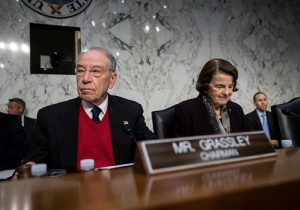 The Senate Judiciary Committee on Thursday released new details of its investigation into the sexual assault allegation against Supreme Court nominee Brett Kavanaugh, revealing that staff have contacted a fourth person who may have attended the high school party where the alleged incident occurred.

Christine Blasey Ford, a professor of psychology at Palo Alto University, has accused Kavanaugh of drunkenly pinning her to a bed, groping her, and trying to stifle her screams at a high school party in the early 1980s. Ford claims that Kavanaugh's then-classmate, Mark Judge, was also in the room at the time. Both Judge and Kavanaugh have denied that the alleged incident took place.

In a letter sent to Sen. Dianne Feinstein (D., Calif.) back in July that only became public last week, Ford wrote that the "gathering" at a Maryland home included her and "four others."

The judiciary committee reported in a series of tweets that staff already interviewed Kavanaugh "under penalty of felony," noting that no Democratic staff participated despite being invited. The committee also said it obtained a statement from Judge and also contacted two other unnamed people who were "allegedly at [the] party described by Dr. Ford."

On Monday, staff interviewed Judge Kavanaugh under penalty of felony. Democratic staff was invited and could have asked any question of Judge Kavanaugh. They declined to participate.

The committee also revealed that staff have "contacted a schoolmate who claimed on social media this week to have info related to Dr. Ford’s allegations."

Staff have contacted a schoolmate who claimed on social media this week to have info related to Dr. Ford’s allegations. Committee has not yet heard back.https://t.co/bWw4oGZXjt

A classmate of Ford claimed this week that the alleged assault did happen and "many of us heard about it in school." The classmate retracted her claim the following day, however, and said she has "no idea" whether the incident occurred.

The series of tweets came after Sen. Sheldon Whitehouse (D., R.I.) pressed the committee on what it is doing to investigate Ford's allegation.

The Senate Judiciary Committee has invited Ford and Kavanaugh to testify on Monday, giving Ford the option of doing so privately. Ford's lawyer said this week that her client is prepared to testify next week, but that Monday is "not possible." The lawyer added that Ford wants an FBI investigation to be conducted into her allegation before she testifies.

Senate Democrats have also called for an FBI probe into the matter, despite the alleged incident not being a federal crime. The White House has indicated it will not ask the FBI to investigate Ford's claims.

The judiciary committee wrote on Twitter that it is conducting its own investigation and said that Democrats are welcome to participate in the process "every step of the way."

Her attorneys say there needs to be an investigation, which is exactly what the committee has been doing all week. And we would love to hear from Dr. Ford. Democratic staff is invited to participate fully every step of the way.