Republicans across the country used Valentine's Day as an opportunity to taunt Democrats up for election in 2018 with crumb cakes and break-up letters.

In Nevada, two boxes filled with crumb cakes were delivered to the office of Rep. Jacky Rosen (D.), who is running for Senate. The boxes were 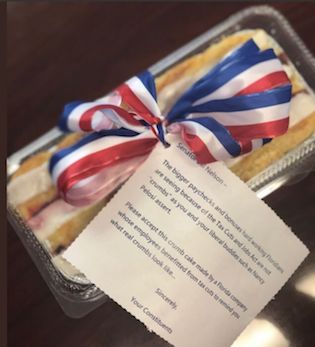 also filled with letters containing messages such as, "We're done. It's not us—it's you."

"Since Democrats from all over have compared bonuses and raises from companies across the Commonwealth to crumbs, we’d like to set the
record straight," said John Whitbeck, the Republican Party of Virginia's chairman. "Hopefully the crumb cake we’re sending him today will help them realize the difference between crumbs and the real, tangible benefits of tax cuts for Virginia workers."

The crumb cakes delivered to Donnelly's office were accompanied by a Valentine's Day card and a list of companies that have given workers raises or bonuses in reaction to the Republican tax reform legislation.

Only Nelson's office rejected the Valentine's Day gift basket, citing ethics laws against receiving gifts. The Republican Party of Florida says the cakes cost less than $50, and therefore were not in violation of any ethics rules.

"The bigger patchecks and bonuses hard working Floridians are seeing because of the Tax Cuts and Jobs Act are not ‘crumbs' as you and your liberal buddies such as Nancy Pelosi assert," wrote a note attached to the rejected cake. "Please accept this crumb cake made by a Florida company whose employees benefitted from tax cuts to remind you hat real crumbs look like."

‘Lady Al Qaeda’ Blamed Jews for Her Conviction. Her Allies Can’t Figure Why A Gunman Attacked Synagogue In Her Name.