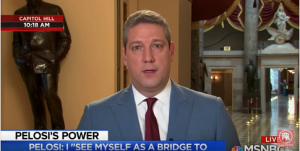 Rep. Tim Ryan (D., Ohio) said this week that an agreement between Minority Leader Nancy Pelosi (D., Calif.) and her Democratic critics in the House will bring about "the kind of change we want."

Ryan was one of the leaders of a group of Democratic rebels who opposed Pelosi's bid for House speaker. Earlier this week, the current minority leader reached a deal that will likely ensure she takes the speaker's gavel in January.

"I think it institutes the kind of change we want," Ryan told MSNBC's Hallie Jackson on Thursday. "It's the kind of change the American people asked for in this past election and now it's going to be formalized in our caucus policies. We have so much young talent, and I think Leader Pelosi recognizes that and wants to begin the process of bringing those people into leadership positions."

According to the agreement, Pelosi will limit her time as speaker to a maximum of four years in return for support from enough Democratic critics in a January House floor vote, Politico reported. Her deputies, Minority Whip Steny Hoyer (D., Md.) and Assistant Democratic Leader Jim Clyburn (D., S.C.), will also be limited in how long they can remain in their positions.

The term limits on Pelosi and her deputies are retroactive, including their time leading the House Democrats from 2007 to 2011, meaning they could at most serve until 2022.

Hoyer and Clyburn suggested they disagreed with term limits. Hoyer, who will be majority leader, said Pelosi "doesn't negotiate for me," and Clyburn said he stands "squarely with the Congressional Black Caucus’ position," which is "adamantly opposed to term limits and seniority modifications."

Nevertheless, Ryan thinks the changes will go into effect, noting Pelosi will advocate for the deal.

"We have a lot of new members coming in, to the tune of 40 or so that are change candidates, and so I think this is going to be implemented. Look, this is a really big deal to have this kind of change in our House caucus. This is what our voters asked for. This is what the American people want, and Leader Pelosi and our group came to some agreement to give it to them," he said.

Ryan acknowledged, however, that the agreement is "not certainly everything that we wanted."

Ryan ran against Pelosi in a bid to become leader of the House Democratic caucus in 2016 but was defeated. Earlier this year, Pelosi referred to Ryan as "inconsequential."