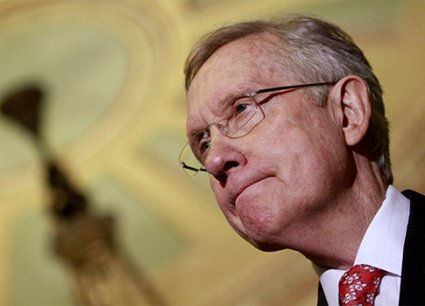 Senate Majority Leader Harry Reid (D., Nev.) on Wednesday criticized a Koch Industries subsidiary for allegedly circumventing sanctions on Iran even though Reid has accepted tens of thousands of dollars in campaign contributions from companies that have done exactly that.

Reid also claimed that the Kochs support the recently introduced House Republican budget proposal. Neither the company nor its owners has taken a position on the legislation.

Reid’s claims were part of an ongoing offensive against libertarian philanthropists Charles and David Koch. Reid has accused them of being "un-American" for donating to groups that oppose the Democratic Party’s agenda.

A page on Reid’s Senate website is devoted entirely to attacking the Kochs. It initially cited former White House economist Austan Goolsbee, who falsely claimed in 2010 that Koch Industries does not pay any corporate taxes.

That claim remains on the website, with its text crossed out. Below is an "update" that claims the Kochs "have supported the Ryan budget, which provides tax cuts for the wealthy and protects taxpayer subsidies for big businesses and oil companies."

The page links to a website from a left-wing nonprofit on the budget introduced by Rep. Paul Ryan (R., Wis.) this week, on which the Kochs have not taken a position.

Reid’s website goes on to quote from a heavily criticized Bloomberg article that accused Koch Industries of "sidestep[ping]" economic sanctions against Iran.

"The Kochs made improper payments to win contracts in Africa, India and the Middle East," Reid claims. "And they sold millions of dollars of equipment to Iran, a state sponsor of terrorism."

After evidence of the said improper payments came to light, Koch Industries commissioned an internal investigation and fired the responsible employees, according to Bloomberg.

Reid has accepted campaign contributions from companies that engage in even more widespread corruption abroad.

According to the Washington Examiner, Reid has accepted more than half a million dollars in contributions since 2009 from employees and political action committees of companies under investigation for violations of the Foreign Corrupt Practices Act.

Reid has also taken $26,000 from Boeing’s PAC. The company is currently trying to reestablish its presence in Iran even though the country remains on the State Department’s list of state sponsors of terrorism.