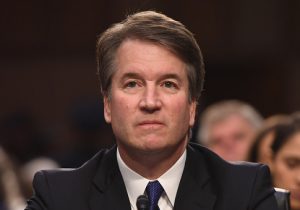 Progressive groups sent a letter to members of the House Committees on the Judiciary and Oversight and Reform on Thursday, calling on them to investigate the confirmation process of Supreme Court Justice Brett Kavanaugh, despite a panel of federal judges dismissing all 83 ethics complaints in December.

Since being confirmed last fall largely along party lines, Kavanaugh has received minimal scrutiny from Democrats in Congress, but they are receiving increased pressure from over two dozen progressive groups to investigate Kavanaugh, demanding inquiries into the allegations of sexual assault against Kavanaugh, according to BuzzFeed.

Kavanaugh and one of the women who said he sexually assaulted her in high school, Christine Blasey Ford, presented dueling testimonies before the Senate in late September. Trump ordered the FBI to conduct a weeklong investigation. The FBI's report was sealed — Republicans said it cleared Kavanaugh, while Democrats argued that it was incomplete, noting that the FBI didn't interview key witnesses, including Ford and Kavanaugh.

Thursday's letter also urges the House to seek access to records from Kavanaugh's tenure in the George W. Bush administration that Senate Republicans released through a contested vetting process run by an outside lawyer, William Burck, as opposed to the National Archives. The groups are also asking Congress to investigate personal financial debt that Kavanaugh had previously disclosed and that the White House said was due to the purchase of baseball tickets and home improvements.

"Senate Republicans made a mockery of their constitutional responsibility to provide ‘advice and consent' on the president’s nomination of Justice Kavanaugh, and the American people deserve to know how and why the process was such a sham," the liberal groups wrote. "The public is just as entitled to a thorough review of Justice Kavanaugh’s record now as it was before he was elevated to the Supreme Court and to know whether allegations against him of sexual assault and perjury have any factual basis."

They also accused the White House of dictating the terms of the supplemental FBI investigation, claiming this limited the amount of time given to conduct the investigation and decide which witnesses could be interviewed.

The 26 groups who signed the letter include Demand Justice, Indivisible, Women's March, UltraViolet, National Women's Health Network, and several other groups who were vocal against Kavanaugh during the nomination process.

Demand Justice, a liberal dark money advocacy group that spent over $5 million in an attempt to defeat Kavanaugh last fall, was instrumental in increasing pressure on Senate Democrats to announce their opposition to the nominee.

Their executive director Brian Fallon originally pitched the idea for the group in last April, months before President Donald Trump nominated Kavanaugh, during the spring conference of  the Democracy Alliance, a wealthy liberal donor network that funnels millions of dollars into approved political groups.

Weeks before Justice Anthony M. Kennedy announced plans to retire, Demand Justice launched a "Ditch the List" website and digital ad campaign targeting Trump's potential Supreme Court nominees. The campaign directly targeted a list Trump previously compiled of potential nominees, one that included Kavanaugh. In June 2018, less than 24 hours after Kennedy announced he would retire in July, Demand Justice hosted a rally with several Senate Democrats on the stairs of the Supreme Court with "Ditch the List" signs.