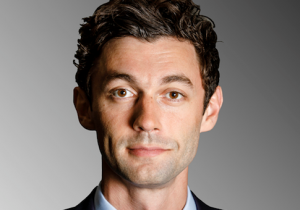 Georgia Democrat Jon Ossoff, who is running to fill the sixth congressional district seat vacated by Tom Price earlier this year, has a seven-point lead over Republican opponent Karen Handel with less than a month before the runoff election, according to a new poll.

The SurveyUSA poll conducted for Atlanta TV station WXIA interviewed 700 voters, 549 of whom already voted in the runoff election or are certain to vote before June 12, according to Roll Call.

Voters in the district were surveyed as evenly split on the Republican proposal to replace the 2010 health care law signed by former President Barack Obama, with 47 percent supporting and an equal number opposing.

Handel might also be hurt by President Donald Trump, who has a 51 percent disapproval rating in the district.

A majority of voters polled also said it was not an issue that Ossoff did not live in the district or that Handel did not have a college degree.

The runoff to replace Price, who now serves as Trump's secretary of the Department of Health and Human Services, will take place on June 20.

"Ossoff’s race with Handel is the most expensive House battle in history, with outside groups having poured more than $18 million into the race so far," according to The Hill.