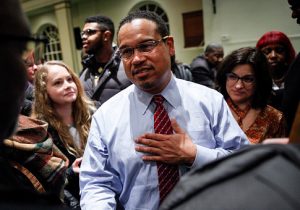 The majority of Minnesota Democrats question the validity of domestic abuse allegations against Rep. Keith Ellison (D., Minn.), the Democratic candidate for state attorney general, made by his former girlfriend.

A poll by the Star Tribune and Minnesota Public Radio of 800 likely voters found that only 5 percent of Democrat responders believed the allegations made by Ellison's ex-girlfriend, Karen Monahan, that the congressman physically abused her as recently as 2016.

On Wednesday, Monahan posted online a medical document from 2017 in which her doctor wrote of Monahan confessing past physical abuse at the hands of Ellison. Monahan also claims to have video evidence of Ellison's abuse, though she has said it is traumatic and she will not share it.

"She states that she was in a very stressful environment for years, emotional and physical abuse by a partner with whom she is now separated," Her doctor wrote in the document. "She identifies the individual she was involved with as congressman Ellison, and she is worried about retribution if she identifies him publicly."

When I post this, it gets deleted every time pic.twitter.com/uAJNx8AgF5

In a previous statement defending her allegations, Monahan said she is not trying to score political points.

"I have nothing to prove to anyone, I simply shared my story. People can believe it or not. I don’t need anyone to affirm my humanity, I affirmed it," she said.

In light of allegations Supreme Court nominee Brett Kavanaugh committed sexual assault 36 years ago, Monahan said she has been treated differently than Kavanaugh's accuser by the Democratic Party. She said she feels "smeared, threatened, and isolated" by her party, of which Ellison is also the national vice chairman.