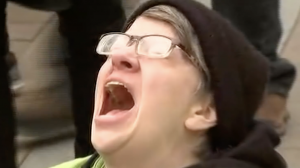 Anti-Donald Trump citizens around the country vented their frustration about the one-year anniversary of his presidential election victory on Wednesday by screaming at the sky.

In the above clip in Pittsburgh, frustrated folks gathered in Point State Park for their primal yell.

"Trump won the election [last year]," organizer Susan Houseman said, according to RabbleVid, "thanks to Hillary, and emails, and thanks to all the people that didn't go vote. So we're venting our frustrations this evening, as a group, collectively."

She then implored the group to scream to "the heavens," which they did for about 40 seconds until they awkwardly trailed off.

A protest in Philadelphia only saw a few people show up; they appeared to be outnumbered by oglers taking pictures and videos of the odd scene.

Today in Weird Philly: a handful of people showed up for a semi-viral event to "scream helplessly at the sky" on the anniversary of Trump’s election (including a couple dozen gleeful Young Republicans, handing out earplugs) https://t.co/AfYFsY0Obo pic.twitter.com/lLBDbV1M27

A Denver resident filmed a group of protesters screaming from a distance away, occasionally laughing out loud at the spectacle.

One video posted last night claimed to be of six attendees at the scream event in Brooklyn.

Another group of videos showed the scene at Manhattan's Washington Square Park.

Crowd members are clashing while screaming at the sky in NYC on the anniversary of the 2016 electionhttps://t.co/aU89B4HfzA

It appears a good time was had by all.

This idea may have been inspired by the viral protester who screamed "Nooooo!" at the moment Trump was inaugurated in January.