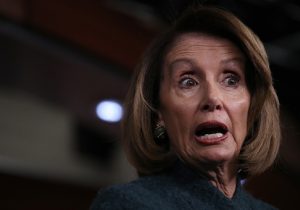 "Leader McConnell seems to take great pride in calling himself ‘The Grim Reaper,'" Pelosi said. "It's part of his political campaign, it's part of the pride he takes as leader of the Senate."

McConnell's campaign has adopted a self-aware style of acknowledging Democratic criticisms against him. For example, his campaign's website's 404 not found page featured an image of Merrick Garland, President Obama's Supreme Court nominee who was stonewalled by McConnell's refusal to consider a vote in an election year.

Pelosi named several specific initiatives shot down by McConnell, pointing to several cut-out tombstones on the display with names of significant Democratic proposals on them. The tombstones included issues like gun violence, equal pay, action on climate change, and net neutrality, among others.

"[They] won't even get a vote. That's what he said about our agenda which encompasses most of our early legislation on what we promised for the people," she continued. "To lower the cost of healthcare by lowering the cost of prescription drugs, by building the infrastructure of America in a green way and in doing so increasing paychecks, lower health care, bigger paychecks, bigger paychecks. Not even going to get a vote."

Public sentiment is everything, Pelosi warned. "The Senate will certainly be hearing from the public on issues, values really, that have bipartisan support across America."