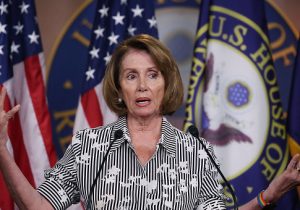 House Minority Leader Nancy Pelosi (D., Calif.) on Thursday attempted to mock President Donald Trump for backing away from attacks against China he previously made on the campaign trail.

Pelosi was holding her weekly press conference when she made her remarks against Trump.

"It was curious to see President Trump in China," Pelosi said. "Candidate Trump said that what's happening in China trade was the greatest theft in the history of the world, and yesterday he said our trade deficit with China, which is huge, is not China's fault."

She went on to say that "you can almost hear the leadership of the Chinese government laughing from China to America."

"Maybe you can feel it coming through the ground, because if you dig a hole here, you will reach China," Pelosi added.

Trump said during his tour of Asia and visit with Chinese President Xi Jinping this week that he does not fault China for pushing trade practices that benefitted its citizens, CNN reported.

"I don't blame China," Trump said. "After all, who can blame a country for being able to take advantage of another country for benefit of their citizens? I give China credit."

This is a shift from what Trump said in 2016 on the presidential campaign trail.

"We can't continue to allow China to rape our country and that's what they're doing. It's the greatest theft in the history of the world," he said.

What Pelosi did not mention is the president also noted, during his same remarks this week, that while he doesn't fault China for doing what is in its best interest, he does fault previous administrations for entering into bad trade deals. He said trade between the United States and China is unbalanced and steps must be taken to change that.

"We want a vibrant trade relationship with China," Trump said. "We also want a fair and reciprocal one. Today, I discussed with President Xi the chronic imbalance in our relationship as it pertains to trade and the concrete steps it will take to solve the problem of massive trade distortion."