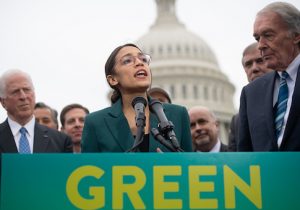 Freshman Rep. Alexandria Ocasio-Cortez (D., N.Y.) on Sunday attempted to downplay her claim that the world will end in 12 years unless Congress acts on climate change by mocking Republicans and saying, "You’d have to have the social intelligence of a sea sponge to think it’s literal."

"This is a technique of the GOP, to take dry humor + sarcasm literally and ‘fact check it," Ocasio-Cortez tweeted. "Like the ‘world ending in 12 years' thing, you’d have to have the social intelligence of a sea sponge to think it’s literal."

This is a technique of the GOP, to take dry humor + sarcasm literally and "fact check" it.

Like the "world ending in 12 years" thing, you’d have to have the social intelligence of a sea sponge to think it’s literal.

But the GOP is basically Dwight from The Office so who knows. https://t.co/pmkwrdeAnq

Ocasio-Cortez and Sen. Ed Markey (D., Mass.) released the Green New Deal, a 14-page economic stimulus resolution that aims to fight income inequality and climate change, back in February. While it has previously been estimated by the American Action Forum to cost up to $94.4 trillion, Ocasio-Cortez and other Democrats, including several 2020 presidential candidates, have voiced their support for the Green New Deal.

"Millennials and people, you know, Gen Z and all these folks that will come after us are looking up and we’re like: The world is going to end in 12 years if we don’t address climate change and your biggest issue is how are we gonna pay for it?" Ocasio-Cortez said. "This is the war — this is our World War II."

After she initially made the claim about the world ending in 12 years, she pushed back against Republicans on Twitter by saying it wasn't a gaffe, but a "generational difference."

For some reason GOP seems to think this is a gaffe, but it’s actually a generational difference.

She has also addressed this claim during one of her Instagram live streams. Last month, a random person appeared to be mocking her claim about the world ending in 12 years and asking her when the world ends, prompting her to become visibly annoyed.

"We have twelve years left to cut emissions by at least 50 percent if not more," Ocasio-Cortez said. "For everyone who wants to make a joke about that, you may laugh, but you're grandkids will not, so understand that the internet documents everything."

She then went on a tangent about looking back in history books of the civil rights movement and seeing the white people holding signs against allowing black people to vote.

"They would hold up these bigoted signs and they would hold up signs that said things like ‘What about white rights?' and all of this stuff in the 1950's and 1960's, so just know that in the present day there are a lot of people who hide the fact that their families and that their grandparents fought against principles of equal rights in the United States, not 100 years ago, not 80 years ago, but in this generation's lifetime," Ocasio-Cortez said.

"While a lot of people can hide that their grandparents did that in the civil rights movement, you should also know that the internet documents everything and your grandchildren will not be able to hide the fact that you fought against acknowledging and taking bold actions on climate change," Ocasio-Cortez continued. "People who are trying to mock and delay this moment, I mean—I just feel bad for you. I just pity you for your role in history right now."

Climate change is here + we’ve got a deadline: 12 years left to cut emissions in half.

A #GreenNewDeal is our plan for a world and a future worth fighting for.

How did we get here?
What is at stake?
And where are we going?