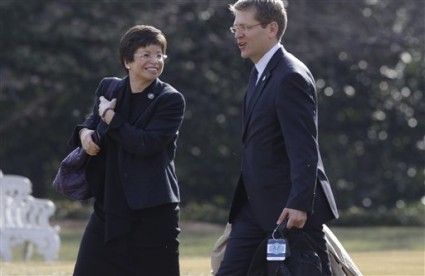 "It seems hypocritical," said Douglas Holtz-Eakin, president of the American Action Forum and a former director of the Congressional Budget Office. "These people benefited from these low rates when they made their millions, and will continue to benefit, while making it harder for other people to reach their level of success."

"High marginal tax rates don't hurt those who already made their money," said Ryan Ellis, tax policy director at Americans for Tax Reform. "They hurt those trying to get theirs. It's pulling up the ladder."

Net worth on financial disclosure forms is listed in broad ranges. Only Pfeiffer has a minimum net worth below $1 million.

However, these five millionaire Obama staffers would actually pay a lower rate under his tax proposal than they would under current law, under which all the 2001 and 2003 tax cuts expire at the end of the year.

The effective tax cut for millionaires like those in the Obama White House highlights a contradiction in President Obama’s proposal to raise taxes only on individuals making more than $250,000 as opposed to the "millionaires and billionaires" mentioned in the president’s speeches. The proposal would penalize those Americans who are not millionaires but earn incomes above $250,000.

The president has indicated that he does not think $172,000 a year is a particularly generous salary. When Gibbs, who also earned the maximum salary during his tenure, announced he was leaving the White House in 2011, Obama praised him for his commitment to the job, despite the "relatively modest pay."

Whether National Security Adviser Tom Donilon would benefit from the Obama tax plan is unclear.

Donilon, who is worth as much as $32.5 million, receives $148,000 in annual pension payments from mortgage giant and taxpayer bailout recipient Fannie Mae, where he used to work as a lobbyist, on top of his $172,200 annual White House salary.