White House Press Secretary Josh Earnest said Monday that President Obama is proud that no one in his administration has suffered a "major personal scandal" during his time in office.

The comment came at the White House daily press briefing during a discussion about former CIA Director David Petraeus' past guilty plea of mishandling classified information.

Bloomberg reporter Justin Sink asked if the Obama administration believes it is a "guiding principle" that someone who has such a charge levied against them should be barred from serving as a senior official in the U.S. government.

"Just as a guiding principle, does the president–or does the administration believe that somebody who's had severe classification issues, for which they've been convicted, should hold senior positions in the United States government?" he asked.

Earnest said that each president is going to "have to decide for themselves" who they name as senior officials and "what kind of person" they want to fill each position.

"President Obama obviously took that responsibility very seriously and assembled a team that he's quite proud of to serve him and the country, and the president has spoken at some length about how proud he is that there hasn't been a major personal scandal in his administration," he said.

Earnest emphasized the personal character of the people Obama chose to serve in his administration.

"The kind of people he has chosen to serve in high profile, influential positions in the administration have done so with a focus on the country's best interest, and the president's quite proud of that," Earnest said. "Obviously the future presidents will have to, I think, will understandably be measured against that high standard. But they'll eventually have to decide on their own who they believe can best serve the country and best serve them in the range of important decisions."

Earnest's statement comes well over a year after it was first revealed publicly that Hillary Clinton exclusively used a private email server during her tenure as secretary of state against State Department rules.

The FBI launched a year-long investigation into the matter to see if Clinton mishandled classified material with her email practices. The probe was initially concluded in July, when FBI Director James Comey recommended that no charges be brought against Clinton, but was then reopened in late October after the bureau recovered new emails while investigating the husband of top Clinton aide Huma Abedin for an unrelated issue. The FBI soon thereafter stood by its initial recommendation to not prosecute.

Another scandal that occurred during the Obama administration was when the IRS came under fire for purposefully targeting Tea Party groups for extra examination and scrutiny.

The Obama administration was also criticized for former Attorney General Eric Holder's connections to the scandal over Operation Fast and Furious, a gunrunning program that let thousands of firearms cross the border into Mexico. 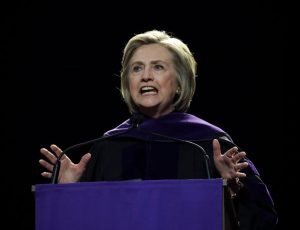 Kerry on $1.7 Billion Payment to Iran: ‘We Gave Them a Little Bit of Money’