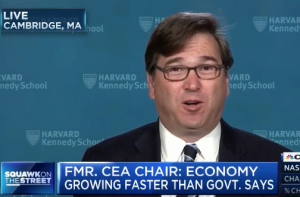 Jason Furman, chair of the Council of Economic Advisers under President Barack Obama, argued on CNBC Thursday that the economy is growing even faster than the commonly used government figure suggests.

CNBC's Sara Eisen said people at the network were surprised to see the argument being argued by an Obama administration official.

"I like to think of myself as an economist who looks at the economic data," Furman said.

"Unfortunately, the numbers published by the government aren't the single most accurate way to measure growth," he added.

"Despite the best efforts of the BEA’s excellent civil servants, the underlying data are noisy and incomplete," he wrote, referencing the data produced by the Bureau of Economic Analysis. He argued the most accurate way to report GDP is to average GDP and gross domestic income (GDI) figures, but that average is often overlooked in reports.

Ultimately, GDI should be identical to GDP, since all money spent is money earned. But in practice the published estimates differ because the data are subject to different errors and reflect different guesses. Research shows that a simple average of GDP and GDI is a nearly optimal way to combine the two sets of information. For the first quarter it averages to 2.8% growth. That is the best predictor of what the government will eventually estimate for GDP after several years of revisions.

The BEA’s statisticians already report this number, which they call "average of GDP and GDI," but they bury it, and the financial press and analysts usually ignore it. The BEA should immediately start reporting this figure as its headline growth estimate, because it is the most accurate way to measure the economy. Until it does, serious analysts can help themselves by playing down the noisier GDP data and focusing on the average, which better captures the economic signal.

While the BEA estimated 2018 first quarter GDP growth at 2 percent annualized, Furman estimated growth at a much stronger 2.8 percent.

The economist credited the federal tax cuts, singed into law by President Donald Trump at the end of 2017, as being responsible for some economic growth.

"I don't think it's hugely surprising that you do a nearly $250 billion fiscal stimulus tax cut spending increase and you get some extra growth out of it," he said.

He noted that the impact tax cuts have had on wage growth is thus far minimal, but that a more significant positive impact could not be ruled out down the road.

"We can pretty definitively rule out the idea that this year's corporate tax cut is being passed into wages," he said. "That doesn't mean it won't happen over time – it's certainly not happening quickly and I have some skepticism as to how much it would happen over time."

Eisen also asked Furman if growth is strong enough to withstand Trump's tariffs, which have been criticized by many lawmakers on both sides of the aisle.

"Look, the tariffs are a negative, we can debate how big a negative they are for the economy," Furman said.

He said the current tariffs aren't a huge negative for growth, but uncertainty about future growth is leading to delays in investment. Just how unhappy companies will be, Furman argued, depends on where they think the Trump administration is going.

Furman refrained from answering a question about whether the economy under Trump is stronger than it was under Obama. He indicated Obama left the economy in "very good shape" and he was looking for an even higher economic growth rate.