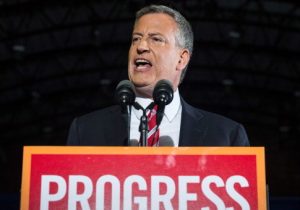 "As a progressive my entire life — and I ain’t changing — I’ll take on any progressive anywhere that thinks it’s a good idea to lose jobs and revenue because I think that’s out of touch with what working people want," de Blasio said, according to the New York Post.

"Working people are very smart and very discerning. They want jobs, they want revenue, they want the kinds of things that government can do for them," de Blasio added. "They understand they have to be paid for."

De Blasio's comments come after Amazon decided earlier this week not to open up a hub in the Long Island City neighborhood. Politicians had offered the company billions in tax credits, a $500 million construction subsidy, and other incentives to encourage it to bring 25,000 jobs to the city.

The company elected not to move forward due to opposition from Queens politicians and neighborhood groups. Ocasio-Cortez said Amazon's withdrawal demonstrated that "everyday Americans still have the power to organize and fight for their communities and they can have more say in this country than the richest man in the world."

"A small group [of] politicians put their own narrow political interests above their community — which poll after poll showed overwhelmingly supported bringing Amazon to Long Island City — the state’s economic future and the best interests of the people of this state. The New York State Senate has done tremendous damage. They should be held accountable for this lost economic opportunity," Cuomo said.

When Amazon announced it was backtracking on the New York headquarters, de Blasio issued a short statement laying blame for the deal falling through on the tech company.

"You have to be tough to make it in New York City," the statement said. "We gave Amazon the opportunity to be a good neighbor and do business in the greatest city in the world. Instead of working with the community, Amazon threw away that opportunity."