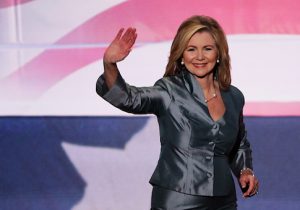 The group said Blackburn is dedicated to protecting gun rights and recommended gun owners vote for her over Democrat Phil Bredesen in the hotly contested race.

"Marsha Blackburn is a champion of our Second Amendment freedoms and has always stood strong to protect the constitutional rights of law-abiding Americans," Chris W. Cox, chairman of the NRA's Political Victory Fund, said in a statement.

The NRA said Bredesen, who has pushed for new gun control measures but hasn't made gun control a marquee issue in his campaign, can't be trusted to protect the Second Amendment.

"Phil Bredesen opposes the constitutional freedoms of law-abiding gun owners and would be a rubber stamp for Chuck Schumer's gun control agenda in Washington, D.C. He can't be trusted to defend our Second Amendment rights," Cox said. "A vote for Phil Bredesen is a vote for anti-gun leadership in the U.S. Senate."

Bredesen did not immediately respond to a request for comment. Blackburn said she was grateful for the NRA's endorsement and said she is dedicated to protecting the rights of gun owners.

"Tennesseans treasure the Second Amendment. I have always fought to defend this fundamental constitutional right and will continue to do so," she said in a statement. "I am grateful to earn the National Rifle Association's endorsement. Tennesseans know they can count on me to be consistent in my support for their rights and freedoms."

The NRA said Blackburn is the only choice for gun owners in the election.

"Marsha Blackburn is the only candidate in this race who will defend our Second Amendment rights in Washington, D.C.," Cox said. "The NRA encourages all freedom-loving Tennesseans to vote Marsha Blackburn for Senate in November."