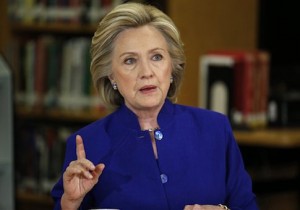 "Hillary Clinton just doesn't get it," the 20-second ad begins. The ad, titled "Hillary Clinton, Wrong Again," then features an excerpt from the Supreme Court's landmark Heller decision saying the Second Amendment contains an individual right to bear arms. Audio of Clinton saying "the Supreme Court is wrong on the Second Amendment" can then be heard.

"I’m going to speak out; I’m going to do everything I can to rally people against this pernicious, corrupting influence of the NRA, and we’re going to do whatever we can," Clinton told those gathered for the fundraiser. "I was proud when my husband took them on, and we were able to ban assault weapons, but he had to put a sunset on 10 years later. Of course [President George W.] Bush wouldn’t agree to reinstate them."

"We’ve got to go after this," Clinton continued. "And here again, the Supreme Court is wrong on the Second Amendment. And I am going to make that case every chance I get."

Clinton has not mentioned her opposition to the Supreme Court's position on the Second Amendment publicly since the fundraiser.

Hillary Clinton recently made clear her opposition to our individual right to keep and bear arms for self-defense.