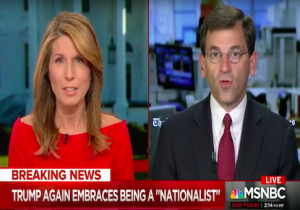 MSNBC host Nicolle Wallace on Tuesday compared President Donald Trump to Adolf Hitler, using Trump's embrace of the word "nationalist" at a rally the prior night to make her point.

Trump called himself a "nationalist" at a rally for Sen. Ted Cruz's (R.) reelection campaign in Texas on Monday night while criticizing "globalist" Democrats.

In response to Trump's remarks, Wallace asked New York Times correspondent Peter Baker whether Trump "does not care" or "does not know" about history, World War II, and Naziism. Baker had just said that Trump "doesn't care what history says."

"He [Trump] doesn't care if history conveys a meaning with these words," Baker continued. "Or maybe he does and it's OK with him because the message he's trying to get out is one that says he more than anybody else is standing up for the United States. It resonated with the crowd last night in Houston. I was there; they loved it. They booed the word ‘globalist'; they cheered the word ‘nationalist.'"

"I watch enough History Channel to know that they cheered at Hitler, too," added Wallace, who went on to say that, by "nationalism," Trump meant "white" nationalism.

On Tuesday, Trump doubled down on his comments at the rally for Cruz, saying the word "nationalist" means he supports American interests over those of other countries. He added that "nationalist" is not synonymous with "white nationalist."

When asked by a reporter at the White House whether his reference to nationalism was "coded language," Trump said, "I've never even heard that. I cannot imagine that theory about being a nationalist. I've heard them all. But I'm somebody that loves our country."

"I am proud of our country," Trump added. "And I am a nationalist. It’s a word that hasn't been used too much. Some people use it, but I'm very proud. I think it should be brought back. I'm somebody that wants to help other countries of the world, but we have to take care of our country. We cannot continue to allow ourselves to be duped on military and also duped on trade."