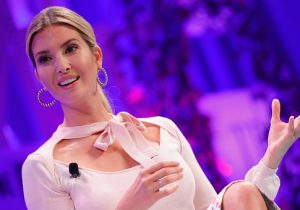 A Newsweek article accused Ivanka Trump of "plagiarizing" herself in a series of pro-woman speeches delivered in trips abroad.

"Ivanka Trump Plagiarizes One Of Her Own Speeches In India," said the magazine, noting similarities between speeches Trump delivered in Tokyo and the Global Entrepreneurship Summit in Hyderabad, India.

"While Trump did say a few lines crafted specifically for the event she was attending … it appeared the breadth of her talking points were recycled from a previous speech she gave during a foreign trip earlier this month," Newsweek reported in the article, published Wednesday.

Newsweek admitted as much, noting "Trump is far from the first person to pull from their old speeches—government officials, especially those campaigning, routinely use their old talking points in updated talks with voters across the country."

But the paper insisted Trump's recycling was still newsworthy because it could be evidence of her "simply her not having anything else to say about women’s empowerment."

Newsweek‘s tweet of the story was "ratioed" when posted to Twitter, with over a thousand detractors pointing out there was nothing controversial about Trump's conduct.

This is both malicious and ignorant. Plagiarism is about theft; you can't steal from yourself. The word they are groping for is ‘recycle.' https://t.co/aIUt1Wz43I

You can't… [pinches bridge of nose] you can't plagiarize your own work https://t.co/5AyErVvB2b

I loathe this woman & everything she stands for, but this is not plagiarism. It’s just repeating oneself. Do better, Newsweek.

Wait until they hear about stump speeches… https://t.co/SjwZOtDzOn