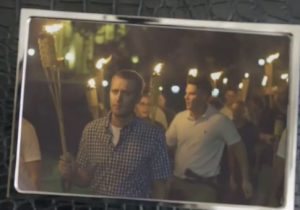 The ad from NextGen America, a political organization started by Steyer, is entitled "Mothers Day" and was released four days before the holiday, NTK Network reports.

The video shows a mother talking about her son, who is in college. The woman explains to the camera that, when her son was younger, he would steal from less fortunate kids. Meanwhile, the ad shows what appears to be a yearbook photo of the son with the quote: "Go back to where you came from."

The mother adds that her son was never afraid to talk to girls, as the ad displays a picture of him yelling at women while holding a sign that says "Baby Killer" and wearing a Trump shirt.

"It wasn't until I met his college buddies that I realized it might be too late," the woman says as a picture of white supremacists in Charlottesville, Virginia appears on screen. "Only a mother can catch the signs early. This Mother's Day, talk to your child about the GOP. I wish I had."

The ad concludes by telling parents to talk to their children about the Republican Party and to "vote them out."

Steyer is known for his vocal opposition to Republicans and President Donald Trump. The California progressive has spent millions of dollars on a national ad campaign calling for Trump's impeachment. Many Democrats have opposed Steyer's campaign, calling it a bad political move.

NextGen America's newest ad is not the only time when a prominent Democrat has compared Republicans to white nationalists. Former Hillary Clinton spokesman Brian Fallon, who now leads the liberal group Demand Justice, tweeted a picture of the Charlottesville white supremacist rally from last year and captioned it by saying it was a "campaign strategy meeting" for Ed Gillespie, who was running for governor of Virginia at the time.