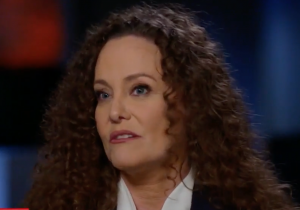 One of the women accusing Brett Kavanaugh of sexual misconduct backtracked in an interview Monday on her claims about his involvement in a series of "gang rapes."

Julie Swetnick, whose lawyer Michael Avenatti has already made television appearances to talk about her accusation, told NBC’s Kate Snow she was not sure if Kavanaugh had spiked punch at the parties where the rapes are supposed to have occurred. That contradicts her sworn statement, as Snow pointed out, but Swetnick is still targeting Kavanaugh.

"Well, I saw [Kavanaugh] giving red Solo cups to quite a few girls during that time frame, and there was grain [alcohol] punch at those parties. I would not take one of those glasses from Mark Kavanaugh—Brett Kavanaugh, excuse me. I saw him around the punch containers. I don't know what he did, but I saw him by them," she said.

In her sworn statement, made public in a tweet by Avenatti, Swetnick has also claimed she saw "trains" of boys lined up at parties, "waiting for their ‘turn’ with a girl inside the room." Monday night, she described the boys as being "congregated together" and said she "didn't know what was occurring."

"Until what happened to me happened to me, I didn't put two and two together, but I would see boys standing outside of rooms, congregated together, sort of like a gauntlet, and I didn't know what was occurring," she said.

"It’s just too coincidental," she said.

Swetnick said she remembers Kavanaugh because he has a "very distinctive face" and was wearing his school uniform at the parties. She listed ways she thought Kavanaugh was guilty of sexual misconduct, but said she couldn't state Kavanaugh was one of the men who gang-raped her.

Swetnick said she had no idea Kavanaugh was likely to become a Supreme Court justice until long after he was nominated. She said she only came forward with her story after Kavanaugh was accused of misconduct by Christine Blasey Ford, the California professor who testified that Kavanaugh attempted to sexually assault her in high school.

"Well, I'm quite a shy person and quite a private person," Swetnick said. "And I wouldn't be here today except for about six weeks ago, I happened to learn about Brett Kavanaugh becoming one of the people who was short-listed to go to the Supreme Court."

By that time, Kavanaugh was not merely short-listed but had been nominated and was considered the likely replacement for retired Justice Anthony Kennedy. But according to Swetnick, she had no idea and only heard about Kavanaugh when sexual assault allegations hit the news.

Ford's allegations were not made public until mid September, only one week before Avenatti–on Sept. 24–began teasing Swetnick's allegations.

As she thought about Ford’s accusation, Swetnick said she started to ponder whether she could help corroborate her account, even though the two didn’t know each other.

"I started to think back to my days when I was in the early '80s in Montgomery County in Maryland," Swetnick said. "And I thought that I might have some information that might corroborate some of the things that she had stated."

Swetnick, in her sworn statement, had alleged Kavanaugh was one of the ringleaders at parties where gang rapes occurred, despite being a minor, and in the NBC interview she said people as old as 25 attended the parties.

She maintained some aspects of her sworn statement on Monday, describing Kavanaugh was a "very aggressive, very sloppy drunk." She also echoed Ford’s claim, made during testimony last Thursday, that Kavanaugh and his friend Mark Judge laughed uproariously during their misbehavior.

Swetnick’s credibility has been questioned owing to evidence she has a history of sexual misbehavior and making false accusations.

"[Swetnick] faced allegations of her own misconduct during a stint at a company 18 years ago," said "Today" show host Megyn Kelly, citing reporting from this past weekend.

"[A former employer said] she engaged in unwelcome sexually offensive conduct herself … she made false and retaliatory allegations against her coworkers … she took medical leave and simultaneously received unemployment benefits," Kelly added.

Sen. Majority Leader Mitch McConnell (R., Ky.) said Democrats' desire to investigate all allegations against Kavanaugh completely is an attempt to delay and obstruct his confirmation.