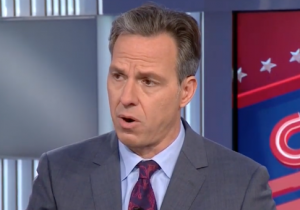 CNN anchor Jake Tapper on Tuesday discussed the Democrats' efforts to take back the House of Representatives, saying it is no blue wave.

CNN host Wolf Blitzer said that Democrats need 21 seats to regain control of the House, prompting Tapper to say, "It's entirely possible" for Democrats to regain the chamber, but he noted that it is not a wave election.

"This is not a blue wave. This is not a wave that is knocking out all sorts of Republican incumbents," Tapper said. "You just called the Kentucky 6th District. Now there are all sorts of ways that Democrats could regain the House without Amy McGrath having defeated incumbent Congressman Andy Barr, but the fact is she did not."

"This was a target. Democrats did hope to win Kentucky 6th," Tapper added.

Tapper wasn't the only media figure saying that Democrats weren't successful with their "blue wave." NBC's "Today" co-host Savannah Guthrie and NBC's "Meet the Press" host Chuck Todd both said, "This is not a blue wave."