In a Monday segment, MSNBC host Kasie Hunt said that the attack on Republican Sen. Rand Paul (Ky.) by a neighbor is one of her "favorite" stories.

"New details today on the incident that left Senator Rand Paul with six broken ribs," Hunt read. "This might be one of my favorite stories."

Hunt seemed to then realize what she was saying, and tried to salvage the moment. "Although of course, we don't want—clearly Senator Paul is still struggling."

Still, Hunt went on to crack wise about the fact that Paul was reportedly attacked because he insisted on cutting own lawn. "I guess that's the libertarian in him," she joked.

"There you have it, ladies and gentlemen, the reason for the first assault on a sitting U.S. senator in decades," she concluded. 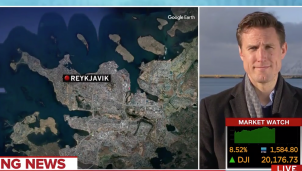 MSNBC Criticizes U.S. for Failing to Control Virus as Effectively as Iceland, an Island of Just 364,000